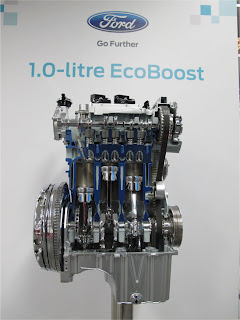 Winner of the ‘International Engine of the Year’ award for 2012, Ford’s new 1 litre three cylinder EcoBoost engine has just received another major award, the Dewar Trophy 2012, presented for outstanding British technical achievement in the automotive industry.

But here’s something you didn’t know, the man heading up the team which designed and produced this wee sweetie of an engine is a Scot, and he was at the UK launch of the new Ford Fiesta yesterday in Manchester.

Andrew Fraser is the Manager for Gasoline Powertrain Development at Ford’s engine R&D centre in Dunton, Essex, and he headed up the core team of over 50 engineers and another 300 or so ‘specialists’ who created this little jewel.

Andrew has been with Ford for 26 years now after graduating from Edinburgh University with an Honours degree in Mechanical Engineering. His first major project was the design and development of the common rail diesel injection system when it was first introduced into the Mondeo, but the EcoBoost engine was something special.

“You don’t often get the chance to design an engine from scratch,” said Andrew, “the opportunity comes round once every 15 years or so, so this was particularly rewarding.”

He also seemed a bit overwhelmed with the praise being heaped on his engine, but one thing really did please him: “McLaren engines were a close second for the Dewar Trophy award,” he smiled!