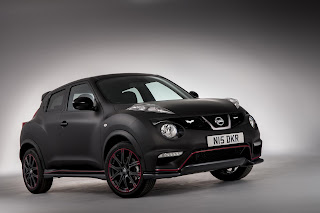 A car for small boys and adults who wear their underpants outside their clothes has been produced by Nissan. To celebrate the launch of the Juke Nismo next month (January 2013), Nissan have produced this special one-off tribute to the latest of the Batman films.

It’s not all sticky backed plastic, dull paint and shiny bits though, for under the bonnet there is a 197 bhp 1.6 litre turbo which will be good for a 7.8 second squirt to 60 from rest.

And there’s more. Open the doors to reveal Bat logos on the kickplates and Bat embroidery on the seats.

It’s all as over the top as the film, and then there’s the name of this limited, one-off (thank goodness), special edition – it’s called the ‘Dark Knight Rises Juke Nismo’. It’s about as subtle as the paint job.

It won’t be for sale. Instead Nissan is giving it away, or rather offering it up in a special competition

To find out more, go to: www.builttothrill.co.uk

Makes you wonder what first prize will be though, eh?
Posted by John Fife at 15:20