Now I know this is not supposed to be a motor racing Blog, but it’s always nice to celebrate Scottish success regardless of the furniture, whether it be tree trunks or crash barriers.

So following on from my earlier story about Ryan Dalziel, it seems he had a right busy weekend.

On Saturday night he was at the annual Scottish Motor Racing Club awards in Edinnotramsburgh where he got some more silverware, this time the William Lyons Trophy for the best performance by a Scottish driver in a sports car. 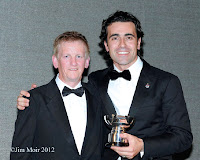 Also in attendance was another Stateside superstar making a welcome appearance on home soil, one Dario Franchitti Esq. He won the John Romanes Trophy last year, and which this year was presented to our new British Touring Car Champion, Gordon Shedden.

And not missing out on an opportunity to grab the microphone was double British Touring Car Champion (and ex-rally driver) John Cleland who presented Gordon with his award before trying to sell cars to the audience. 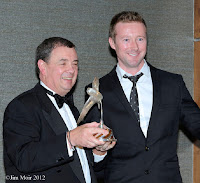 And speaking of talent, 21 year old Ross Wylie from Falkirk received the Ecurie Ecosse Hubcap for his efforts in his first season in saloon cars, an award which is presented annually to the most promising young Scottish driver of the year.

And there wasn't a dry eye in the house - nor a dry glass. Even the bar was dry - eventually!

Special Note: All photos by Jim Moir (who has been at this fame for 38 years now!)
Posted by John Fife at 15:16