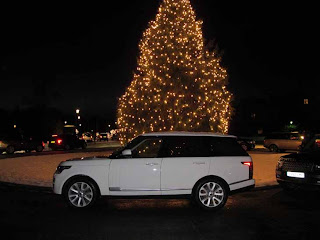 Well, that was a first. Venison salami. It was served with celeriac slaw, grilled apple and whisky dressing. Actually, it was quite tasty, and the occasion? This was the Sottish launch of the new Range Rover at a secret location somewhere in Perthshire.

Following the late afternoon technical presentation of the new car, we went for a 'twilight drive', just to sample this latest incarnation of Range Rover's top of the range luxury motor. Then it was time for tea.
Tomorrow there will be a much longer drive - and some off roading.

First impressions? It's as silent as a cathedral, except those used in a Dan Brown book, as comfy as Frasier's Dad's armchair and as seductive as an 25 year old triple distilled Macallan. At the presentation, the Land Rover designer and engineer went into detail about comfort, interior space and gadgets, from which it became quite clear that they regard the Range Rover as rather more than an SUV. This is a luxury car - period.

It's shorter than an Audi A8 and has more interior leg and shoulder room. Fixtures and fittings are on a par with Bentley, although the LR boys say it is better!

The Range Rover is no longer a tool for farmers and estate owners, horsey types and the landed gentry, this a car for footballers and pop stars, oligarchs and international bankers. The people who can afford this are not interested in mpg, they only want to know if they can conduct a phone conversation without shouting.

But this being Range Rover, it's not just about the show, it has the go to match. Apparently the wading depth has been increased to 900 mm from the previous model's 700 mm. That's down to the ingenious 'Queen Mary' funnels under the clam shell bonnet. Gone are the side vents on the front wing, they have been moved up to the top of the wing with a shape not unlike steam ship funnels, hence the engineers' nickname.

We'll find out tomorrow if it works!
Posted by John Fife at 23:38