Santa’s had a fight with Cameron, Clegg and Miliband
It’s political correctness gone mad with moves underhand.
Instead of discussions, debates, and exams
MPs were watching ‘Apprentice’ and ‘X Factor’ programmes

Square eyed and befuddled they then did conspire
To revoke Santa’s licence and make him retire.
Monopoly they cried, he should face competition
So they plotted to create a new job description

No longer will Santa be the solitary choice
He will have to compete with new men and boys.
They all want the job with just one work day a year
And the rest of time off to play and drink beer.

If that sounds like a job you’d all think you’d like
Then I’ll need to be smart and get on my bike.
I have the right shape and can bellow ‘Ho Ho’
And know world geography with my level at ‘O’ 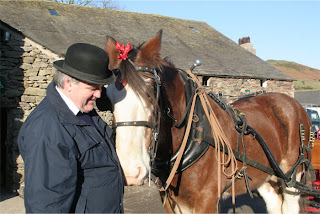 But to win this one contract I’ll need to be smart
I’ll replace deer and sleigh with a horse and a cart.
Reindeer can cause damage with their sharp pointy hoofs
My horse will be grounded so no damage to roofs.

I don’t need a chimney and will enter by door
And leave the kids’ presents under the tree on the floor.
So look out Rudolph and Blitzen and all of the rest
I’ll have just ONE horsepower, but it will be the best.

I’ve relinquished the day job to take up the reins
For this one night tour to bring joy to the weans
So, to hell with the pencil, the notebook and lap top
This Christmas Eve will resound, to the clippety clop!

Merry Christmas - and a safe and successful New Year
And remember one thing - when on stage, 'gie it laldy'!