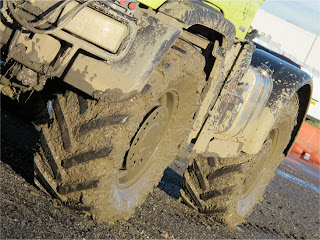 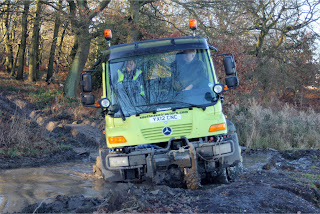 Yesterday it was Range Rover in Perthshire, today it was something different in Yorkshire. The vehicle on test had a carbon fibre cab wrapped around a rollcage for strength and lightness, it had two seats, an eight speed gearbox (and six reverse gears!) and a 6.4 litre straight six engine, and it was sat on 315/80 by 22.5 tyres. Any ideas yet?

This was no ordinary vehicle, it was a Unimog. If the Range Rover is surprisingly capable off road despite its smart clothes, there's no kidding with this device. Built by Mercedes-Benz, this is an extreme 4x4 for special applications, from snowploughing and blowing, to forestry work and extreme agriculture. In other words, it is strong enough to pull a Wag off a footballer's wage packet.

What Mercedes-Benz omit to tell you is that it can be a whole dose of fun despite its working clothes, even at slow speed. This monster's ability to crawl over and through anything never fails to impress. It will traverse ruts deep enough to lose cars and wade through mud pools deep enough to hide hippos.

Stick it in second gear , don't touch any of the pedals and it will just keep going till it runs out of juice. All the driver has to do is steer. It's more gigglesome than the Chuckle Brothers at a tea party for tiny tots.

In fact it really is too much fun to waste on council duties and work.
Posted by John Fife at 15:09