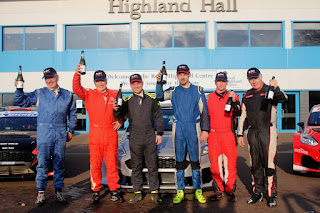 Normal service has been resumed ... After yesterday's nonsense it's back to the old routine for 'jaggybunnet.co.uk' with a full report from the DCC Stages now in the on-line mag.

James Ford and Matt Daniels won the DCC Stages Rally first time out in a brand new Ford Fiesta Rally2 ahead of the similar cars of Alistair and Colin Inglis, and John Marshall and Craig Wallace. Both Gordon Morrison and Jonathan Mounsey were well up for the fight but lost out on a possible top three finish with problems in their Fiestas.

Most encouraging was the entry for the event with over 80 cars and crews taking part plus another 20 Juniors on the Sunday event - report on that to follow.