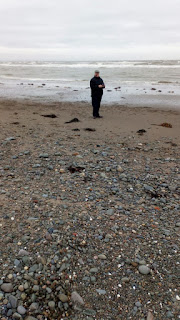 The Bunnet has landed ... Apparently my Big Pal Jaggy is back on home soil. It would appear that his residency permit for his beachfront retirement shack in the sun has been revoked.

When clouds of black reek and ash started appearing on the horizon, the big chap was forced unceremoniously to leave by the locals. Fears had been expressed by the islanders that their extinct volcano was no longer extinct. Their decision was not revoked even when they found the innocent source of this onshore smog came from a certain pipe baccy composted from a unique blend of shredded Pirelli KM6s, burnt clutch linings and Highland coo dung.

On the plus side his neighbour's pet coo Daisy was so delighted at the big chap's enforced return that she took a selfie with him to prove that he was indeed back on home soil on a pebbly beach, under grey skies and wrapped up in a full and fashionable Damart ensemble.

On the other hand it could all just be a horrible nightmare and life will return to normal on the 2nd of April. 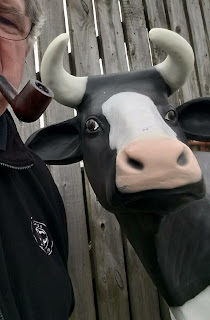