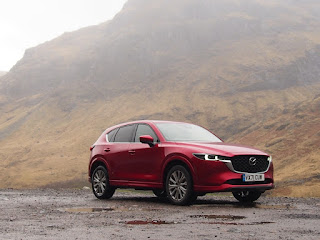 Mazda were in Scotland this week to launch their striking new CX 5. Although quite a few of the main motoring magazines prefer Yorkshire or Wales for 'driving' roads, there are many roads in Scotland which could rival, or even surpass, the best of them - although I might just be ever so biased.

However, Mazda has long been a fan of Scottish locations for product launches and this week provided a perfect example. Even though it was ever so slightly damp, Scotland laid on a warm welcome and Mazda laid on a thoroughly enjoyable 200 mile route on which to sample various petrol and diesel, 2WD and 4WD examples of their latest incarnation of their popular SUV.

Although Mazda is currently working on a range of hybrid and fully electric cars they reckon ICE will be around for a few years yet. The trouble is, this new CX 5 is so good, it will put a few folk off making the leap to electricity any time soon.

The Mazda route started from Balloch at the foot of Loch Lomond and headed north via Drymen, Aberfoyle and over the Duke's Pass to Kilmahog, then on and up through Lochearnhead to Crianlarich and Tyndrum. From there it was onwards and northwards over the bleak and desolate Rannoch Moor with a glimpse of wet and watery sunshine glinting on the many tarns and lochans. 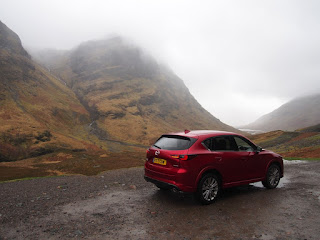 The approach to Glen Coe itself was as usual dominated by the dark brooding presence of the Buachaille. The sentinel was initially glimpsed through the gloom as a ghostly grey giant which guards the entrance becoming ever darker and more menacing on the approach. In fact the rain and the mist merely added to the chilling atmosphere and impressed many of the further travelled motoring journalists, especially one chap who had never been north of Hadrian's Wall before!

At Ballachulish the route turned south towards Connel round the top of Loch Awe and headed south to Inverary. From there it was a short hop down through Glen Kinglas and Glen Croe to Arrochar and back to Balloch.

It was indeed a grand trip and an enjoyable drive in a quite splendid motor through a mighty impressive landscape. Perhaps a timely reminder that we shouldn't take our homeland for granted, even when it is wet and cold! 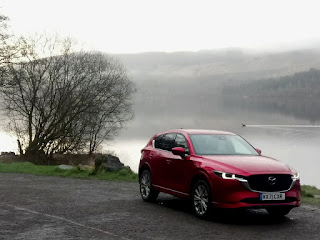