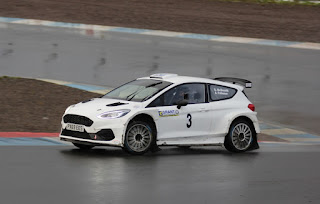 Donnie MacDonald and Andrew Falconer won last Sunday's Grant Construction Knockhill Stages Rally first time out in their new Ford Fiesta Rally2. Only 17 seconds behind at the finish after ten stages was the Ford Escort Mk2 of Kyle Adam and Steven Brown displaying a remarkable feat of car control in atrocious weather conditions.

However, the absolute best battle of the day was the fight for third place which ended in a  dead heat between Des Campbell and Craig Forsyth (Peugeot 206) and Steven Hay and Cameron Dunn (Vauxhall Corsa). The bump stops in both cars took a  severe hammering given the way the 'wee' cars were chucked around Knockhill's tarmac track and hillside wilderness. That battle alone was worth the visit.

There will be a report and photo in Thursday's 'Motor Sport News' and a full report in the on-line mag at the weekend.