The KNC Groundworks Scottish Rally Championship held its 2021 awards ceremony a couple of weeks back and I foolishly asked if I could have a few pics of the winners just so that those of us who weren't there got a chance to see the great and the good, the talented and skilful, as well as the ever hopeful but hopeless.

By all accounts it was a most successful ceremony and a most enjoyable evening. It was Tom and Sue Hynd's first year in charge so they can be well pleased with the turnout. And it seemed that most attendees had made an effort. After two years of hiding away from Covid, folk could finally get together, albeit socially distanced. Of course!

Anyway, Tom said their official photographer, John Lindsay Photosport could give me what I wanted, but he struggled. Seriously. I had given John a list, but there was a problem, he couldn't recognise many of the folk he had photographed. So he sent me the whole set. All 609 of them.

Having spent ages going through all 609 I can see what he meant. I hardly recognised anyone at all either. All the women looked fabulous (is that too sexist?) whilst all the men didn't. They just looked, - - well - different!

For sure they were all better dressed and almost better groomed. No more race suits and helmets, Instead, happy smiling shiny faces, untousled hair and beards (mostly), clean fingernails and clothes that had their designer labels and price tags carefully tucked away out of sight. Mind you, John's photos might have been too good. On some you can see the stretched button thread straining on jackets which were attempting to cover the after effects of the Covid lockdowns.

In days gone by some of these photos would have made the national and local press, but the sport doesn't get the recognition or coverage it deserves, or even once had. It's all social media these days. So here's my selection.

Much has already been written about Garry Pearson and Niall Burns' remarkable run of achievements this past year although they now face their biggest challenge yet, an all out attack on the British Rally Championship itself. It's been ten years since a Scot last won the title when David Bogie clinched it in 2011, so Garry and Niall need to put that to rights this coming season.

They are pictured with runners up Jock Armstrong and Cameron (Masterchef - Masterchippie?) Fair. 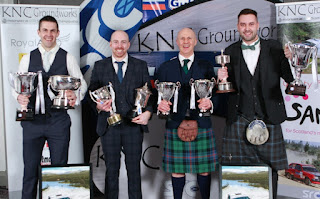 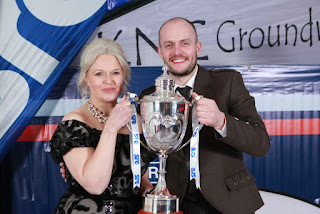 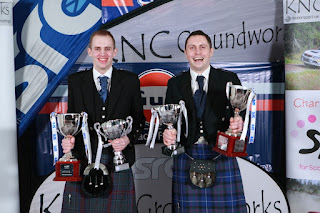 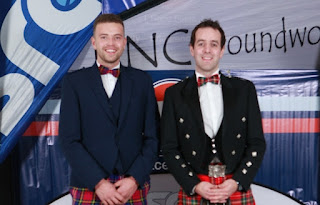 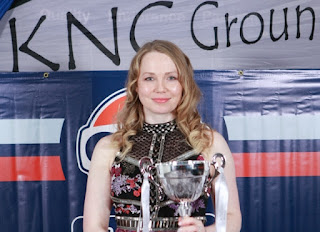 However there were a number of photographs which daren't be shown here. One of them appears to offer conclusive proof that Donald Trump's hairy ancestors came from the Elgin area while another showed a rather well dressed and groomed kilted gent at the start of the evening, but a photograph taken much later showed the same somewhat dishevelled gent looking like the after effects on a shop mannequin after a bin wagon had reversed through the window. And there was another of the Hairy Highlander himself who looked remarkably stylish apart from the hair, the beard and the sandals. In fact he looked as though he just stepped out of an image of The Last Supper!

Such images as these should not be inflicted on an innocent public!