Kalle Rovanperä scored an emphatic victory at Rally Sweden winning by 22 seconds after Toyota GR Yaris team-mate Elfyn Evans crashed out in a snowbank on the final morning. Rovanperä now leads the series by 14 points after round two of 13.

Five different drivers led during a fast and furious opening day with Rovanperä regaining the initiative early on the second leg, but Evans remained hot on his heels before his untimely exit.

Evans and Scott Martin were fighting to overcome a 10sec penalty imposed late on Saturday night when the car slammed into a snowbank in Sunday's opening speed test. The front of the car was damaged too badly to continue.

After a disappointing opening round last month, second place for Thierry Neuville provided a timely boost for Hyundai Motorsport. Esapekki Lappi eventually finished 8.6 seconds behind Neuville to promote Hyundai into the top spot in the manufacturers' championship. Takamoto Katsuta made it three GR Yaris cars in the top four, a further 1min 48.8sec adrift.

Gus Greensmith and Jonas Andersson overcame a troubled opening leg, when a trip into the snow and gearbox problems delayed them, to end fifth in a Ford Puma. Craig Breen and Paul Nagle retired on the second stage after getting stuck in a snowbank. Once free from the snow, the car was driven back to service where it was repaired for the Saturday stages but the car suffered an electrical issue and was forced to retire.

Oliver Solberg was in the midst of the lead battle on the opening day, but throttle problems on his i20 N cost time on Saturday and he dropped to sixth.

Despite a 1m 40s penalty Chris Ingram and Ross Whittock finished 14th o/a and 7th in WRC2 in their Skoda Fabia Evo. 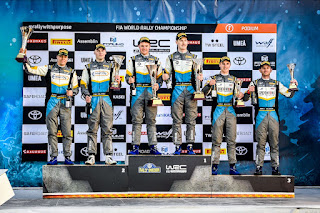 Robert Virves kicked off Rally Sweden in strong form but crashed on stage two. Reigning champion Sami Pajari then seized the rally lead but retired due to a fuel pump issue. He returned on Day 2 taking five stage wins in a row but was denied a clean sweep of stages by Jon Armstrong on the final stage of the day.

Saturday saw a true dogfight breakout between Joona and Armstrong as the lead changed three times throughout the day. Armstrong led following Saturday’s opening stage, but Joona responded on the following stage holding Armstrong off until the last stage on Day 2 which saw Armstrong take the stage win and re-take the lead.

Joona hit back on Sunday morning with a stage win, before Armstrong scored a fastest time on the following stage to go one second faster than Joona, putting himself exactly half a second ahead and then extended his lead on the penultimate stage of the rally to three seconds.

On the final Wolf Power Stage, Armstrong lost just three tenths of a second to Joona, claiming the opening victory of the season and arguably his most convincing victory in Junior WRC to date.

Jon Armstrong, said: “I'm a bit surprised. First of all, I did not think I would be starting the season as it all came together very late, so I was just happy to start. The fight against Lauri was very intense, I don’t think I have had such a tough fight against anyone before. I can’t believe it, to come here and win is crazy, I thought a podium would be good, to take the win is something else. Me and Brian worked really hard, got on really well and the notes have been really good. What a start to the championship.”

The series pauses for an early-season break before returning at the Croatia Rally on April 21-24. The asphalt event is based in capital city Zagreb.