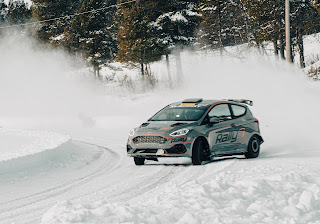 I know this isn't a Scottish rallying story, but I couldn't resist it, there is a connection. On this weekend's Swedish Rally, the 27 year old East African Rally Champion will make his WRC debut. The only trouble is, he had never seen snow before till he got to the pre rally test last week.

His name is McRae Kimathi and he drove an M-Sport Poland Ford Fiesta Rally3 to the African junior title last year.

And with a name like that you know where it came from. Apparently he idolises the late 1995 World Rally Champion adding: "Colin McRae was my hero – I was named after him. In terms of current drivers, Sébastien Loeb is my favourite. I just love his driving style."

Sweden’s sub-zero temperatures and snow-plastered roads are a far cry from the baking heat and dusty rally tracks the 27-year-old is familiar with, but he’s up for the challenge.

“I’m actually so excited, but I’m just scared of the cold!” Kimathi joked on arrival in Norway for a pre-rally test in the four-wheel drive Ford Fiesta Rally3: “We’re not really used to that type of weather – it’s normally sunshine all day long. I've never been on snow before or anything like it, so it’s a completely new experience."

“The car is really fantastic and so good to drive. For this year, there are a few new upgrades and there will be a bit more power and torque, so it could be more of a challenge.”