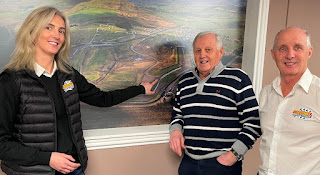 Over the years, Knockhill Race Circuit has named many of its corners and straights after famous racers on two and four wheels. Admittedly some corners were re-named for a while with the likes of 'Real Radio Hairpin', 'SEAT Curves', 'Scotsman Corner' and the 'John R Weir Chicane'.

Despite that, circuit fans stuck stubbornly to the 'proper' names, 'Taylor's Hairpin' named after Scotland's only World Champion on 3 wheels, Jock Taylor, 'Duffus Dip' (after motorcycle racer Alan Duffus), 'McIntyre' (after the late, great Bob McIntyre) and thankfully the only other name by which the Esses are recognised is, 'Chicane'.

Thankfully we still have the Hyslop, Stewart and Brabham Straights, and the Clark, Leslie's, and Butcher's corners, and it's only right that the Butcher name is revered in this fashion. It was Derek who saved the original 1974 track from reverting back to farmland in 1983.

And now a new name has been added to this iconic list as Knockhill approaches its 50th anniversary (excavation work started on the original track layout in 1972) and one that marks the sport of rallying.

As of now, there is a new corner called 'McRae's', the right-hander at the bottom of Duffus Dip, which turns from the track on to the loose Rallycross stage. So named as it combines the two disciplines of rallying and racing.

Jim McRae was actually at the Grant Construction Stages Rally the other week, for two reasons, one the naming of the corner and the other in connection with the planned McRae Rally Challenge on July 2nd and 3rd. At this event, there will be an official ribbon cutting ceremony.

The McRae and Knockhill names are intertwined with Scottish motor sport with Jim, Colin and Alister all having both raced and/or rallied around the circuit and its special stage over the past 40 years.