Rally - Flat Out at Kinloss 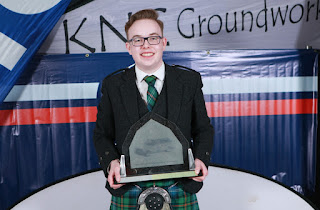 Professional racing driver Sandy Mitchell's anticipated baptism of fire at the Kingdom Stages Rally last November fizzled out like a damp squib on the second stage. He was down to co-drive for his rallying pal, young Johnnie Mackay, but the Fiesta ST struck trouble on the second stage.

At least they got one stage done and it was enough to intrigue Sandy so he has accepted the call to co-drive again on to-morrow's Kinloss Stages Rally.

However, I have one regret. There are no in-car cameras allowed because of the nature of  the venue so we won't hear or see what the pair of them get up to. I reckon the audio would be much more interesting than the video with the Lamborghini works race team driver trying to tell the 'sideways to victory' Mackay what a 'racing line' is, especially considering the fast and flowing nature of some of to-morrow's tests.

Johnnie's idea of a 'racing line' is something you take in to a betting shop where you lose money faster than going rallying, so his driving style will be under scrutiny from the proven race-winning occupant of the left hand seat.

In fact I would pay money to hear the polite discourse that is sure to the ensue when the British GT Champion sits beside the winner of the Scottish Rally Championship's 'Flat-Out' Trophy and the red light turns green!

By the way, the awfy clean and highly polished young man in the (John Lindsay Photosport) picture is indeed the aforementioned Johnnie Mackay clutching his 'Flat Out' trophy which is awarded annually to the Scottish Rally Championship's hardest trier. I hope Sandy remembers to give his six point harness an extra tightening tug at the start tomorrow.

Scotresults will again be providing updates from the rally during the day.