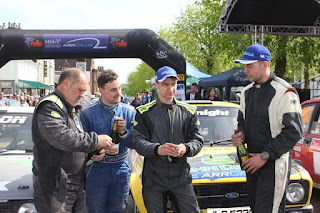 Although Greg McKnight and Harry Marchbank won yesterday's 2WD RSAC Scottish Rally outright, they won't get maximum points in the ARR Craib Scottish Rally Championship. And neither will Iain Wilson and Chris Williams get runner-up points. Instead, points will be allocated by amalgamating the total finishing times between the 4WD Rally winners and their 2WD rivals. Which set me thinking.

If this year's RSAC Scottish Rally comprised two separate events with two separate sets of results over identical stages, then why not award separate SRC Points to both sets of winners? Or even half points to each top 14 as opposed to full points for the top 29? For sure it would spice things up towards the end of the season.

Such a scheme would not affect Class points as the two separate events were divided along current SRC class divisions anyway, so no change needed there.

And given the fact that we have already lost a round earlier this when weather stopped play in the Borders, then such a scoring option might have added a little extra drama and excitement to the 2018 competition.

Sadly it can't and it won't because 'rules is rules' and they can't be changed part way through a competitive season, but perhaps it might be something that organisers could look at in future.

The Scottish Tarmack Championship already awards its overall championship points on a class based system as opposed to first over the finish line, and whilst that works for them, I'm not quite advocating the same system for the forest rally competition.

The RSAC came up with yesterday's format before the MSA relaxed its rules on rally seeding and running order just last month, so rallies may not need to run such a format in future, but why not? And why not award equal points for both sets of winners?

If just two events in each championship season were to run such a format then it might inject a little bit more uncertainty into the final contest outcome, much like 'playing the Joker card' to score double points in  the British Championship - but only better!