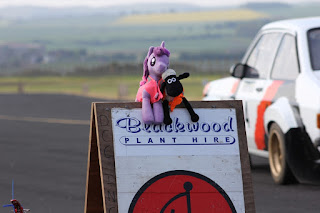 What a carry-on at yesterday's Granite Stages Rally at Leuchars. 50 cars started the Senior Rally and 24 finished. On the other hand, 13 Juniors started their own separate event at the same venue and all 13 finished. And there's more, the competition was much fiercer and much closer amongst the Juniors than their elders and betters! Who's teaching who these days, eh?

What a marvellous competition, just a pity we couldn't see any of it. Under current motor sports rules and restrictions no spectators were allowed and everyone else confined to the Service Area, so all we have are the stories and tall tales. What a pity, but then as I've always said, rallies are first and foremost for competitors, not for spectators.

Alan Kirkaldy was the fastest man round Leuchars all day - and one of the best survivors. He was a tad lucky though. On one stage he caught another car after the stage split and there was a slight 'altercation' on the approach to the following bend. Either the car ahead braked early or Kirkaldy braked late, but they touched. Slightly more than 'ae fond kiss' but all that was needed was some tank tape for both machines afterwards.

Co-driving for Kirkaldy was newcomer Eoghan Anderson. He had actually won a seat with Kirkaldy at the STRC awards last year when he won the charity raffle. He might not be so brash next time such a prize is offered.

First time out in a newly built Subaru, Ian Forgan with 14 year old daughter Sarah, were second while Ian Paterson was third, also with a 'new', but rather more care-worn, co-driver, his cousin Alan Paterson.

Alan Gardiner in the Mk1 and Colin Gemmell in the Mk2 had a rare old tussle for fourth, but the 'drives of the day' finished 6th and 7th. Finlay Retson scored 6th in his Fiesta R2 while Michael Harbour was 7th in his Citroen C2 just 17 seconds behind him. These two going at it like a pair of Jack Russell's spotting the same rat.

They were the fortunate few of course, because Gordon Morrison broke his exhaust manifold, Alistair Inglis his gearbox, both John Rintoul and Tom Morris were sidelined with steering problems and Lawrence Whyte whacked a concrete lamp post - but you'll have to wait till later in the week for the full story, Ed.

Meanwhile away from this unruly bunch, the Juniors were going about the serious business of clean and fair competition. At the 6 stage (out of 11) mark, 4 seconds covered the top 4 places, how close was that? Sadly, rally leader Andrew Blackwood broke his gearbox and then missed the next stage while the boys changed the 'box so that he could get back and re-join the fray although not in the hunt for top points. So cruel, eh?

Johnnie MacKay took up the top spot, but there was a frenetic duel for second place just inches from his bumper. Lewis Haining and Oliver Hunter ended the rally tied on times with Haining getting the place courtesy of a quicker time on the opening test. Archie Swinscoe was fourth just ahead of Amy McCubbin.

As ever, there will be a full report from the rally in the on-line mag later in the week.