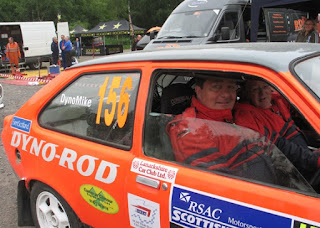 He was originally a member of 'the Bothwell crowd' a bunch of motor sports fans who met up regularly in the old Silvertrees Hotel in Bothwell in Lanarkshire in the 1970s. Most of them were members of Lanarkshire Car Club although a few interlopers from Coltness CC inveigled their way in. He lived in Bothwell at the time and got his leg pulled mercilessly for being a bit posh, although he gave as good as he got.

His own competition career started in Autocross and throughout the mid 1970s he campaigned a Mini in the Players No6 Scottish Autocross Championship before inevitably turning to rallying. Business beckoned as the 1980s dawned and his attention was diverted elsewhere, but invariably he would show up at occasional events for a look-see and a chat. He never lost his interest in the sport nor his desire to compete and in 2006 acquired a Vauxhall Chevette HS.

The car was unmistakably liveried out in the fluorescent red of Dynorod, for whom he managed his own company franchise in Glasgow. He had a fleet of glowing red vans at the time and I well recall being badgered about the fragility of Transit gearboxes - until he told me how much weight the vehicles had to carry. No wonder!

His return to rallying for the next three years was never intended to be anything more than having fun, and that's just what he did, although he did manage a few Historic class wins along the way.

Mike was a lovely bloke and an absolute charmer and he'll be missed by his many friends in the sport but not nearly as much as his family. Our thoughts and condolences must therefore go out to his wife Susan, and family Lesley and Victoria, and his grandchildren Nicholas and Callum and to his wider family and friends.