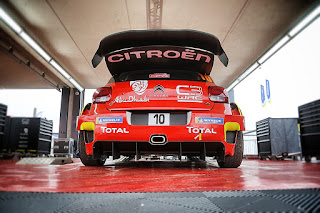 Much will be said over the coming  days and weeks about the rights and wrongs of Citroen WRT's decision and announcement. All of it will be conjecture and pure fancy because none of us will ever know the truth. All we have at present are our own thoughts and opinions. The trouble is, we're unlikely to get the real truth until such times as Kris buys his M&S slippers and luxury towelling dressing gown, lights a candle and sits down to write his memoirs.

On that basis there are a number of considerations to take into account. Perhaps the main one has to be Citroen's adjustment, or lack of it, to the fact that they are no longer the top team with the best car. That period has come and gone, like McLaren in F1.

To us outsiders, it would appear that Citroen have not adjusted to that concept as well as McLaren. That's down to a number of factors. McLaren is a small-ish company steeped in the tradition of motorsport and only too well aware of the fragility of reputations and expertise - and of course the old saying, "You are only as good as your last result".

On the other hand, Citroen is a huge company in its own right and part of much bigger corporate conglomerate so there are many more Directors, Managers and individuals to fight with to get the budget. Expectations run very high at international corporate level and patience is in short supply. I suspect that much of this additional pressure was felt by and shared amongst the rally team personnel, including drivers.

Coming just after the 'Sebastien Loeb era', one wonders if the Citroen hierarchy simply expected things to continue as before. The truth of the matter is, other teams have caught up in terms of technology. The C3 is still a good car, it's just not the best any more. Could they accept this 'new order', or more to the point could they accept constructive criticism? Publicly Meeke was very positive and supportive of the new car, as any team leader should, but privately, could the engineers accept Kris' opinions and suggestions?

One wonders if that was why Loeb was brought back. A second opinion was sought. Perhaps to see if he substantiated what their other drivers were telling them. Remember, Loeb did say the car was good on tarmac - although he didn't really comment about its gravel capability.

No-one knows what team orders were given this year, but it was widely thought that Kris would go for the win - where he could - while Craig went for points and experience and Stephane was being groomed for the future.

This latest crash gave the team the perfect opportunity to dispense with Kris and Paul's services and will undoubtedly give the current team leadership some respite and somewhere else to lay the blame, while they prepare Plan B. One can only imagine the pressure the team was under to deliver the kind of results that the top Citroen hierarchy expected. In that way, this decision might be regarded by some as the easy opt out. The trouble is, Kris is one of the very few drivers who have the raw speed and talent to flatter a less than perfect car, no matter how small those imperfections may be. But he is having to take risks to achieve the results they want.

You only have to look at the stage timing on WRC events. Drivers are now fighting over thousandths of a second per stage. That's crazy. Driving flat-out means there is NO margin for error. If you drive at 99% you lose out, if you drive at 100% you have a chance, if you drive at 101% you won't make the finish.

Meeke has the raw speed to challenge at the top but he needs the tools, the equipment and the support, like any other top driver. If any one of those ingredients is past its sell by date, then it is much easier to lay the blame elsewhere. To us it's a sport, to Citroen, it's business.

That's not to say Kris is blameless, he has had his moments, eh? But that's what make him such a charismatic, gifted and ultimately, one of the fastest men on earth.

Mind you I'm biased. I thought the youngster had something the first time I saw him. That was 18 years ago on the Galloway Hills. He was driving his Peugeot 106 on his first Scottish gravel rally and he was a sight to watch. A year later, he returned with his Dad's Subaru. First time out in 4WD he won it. And he won it in style. A star was born - and I still regard him a star.

And whilst it might be easy enough for us to question the authority, knowledge and experience of someone's employers, that's not so easy for a paid employee to do!
Posted by John Fife at 19:04