In every job there are good days and bad days. That applies to motoring journalism too. It's not all glamorous cars and exotic locations, more likely wet and windy, and driving something with less poke than a blunt stick.

Of course it's the job of the journalist to make things read well and sound interesting, and express the appeal and excitement of a manufacturer's new product. That can be difficult when its Manchester, it's cold, it's very wet, the traffic is solid and unmoving and the test vehicle is a 3.5 tonne van with a load. 'Top Gear' it ain't.

And then there are the good days. The Ford Mustang is not just a car, for those of us of a certain generation, it's Steve McQueen and 'Bullitt', or maybe even 'Gone in 60 Seconds'. It's the stars and stripes on wheels. It's the very essence of America. The car has been transformed over the years to comply with emission laws and safety requirements, but the current generation is still unmistakably Mustang. From the front grille to the rear tail lights, the fastback silhouette betrays its pressed steel and cast iron origins.

There is however something missing from this one. It's like being seduced by a Thornton's Easter egg and opening it up to find someone has nicked all the sweets out of the centre. There are in fact, two Mustangs. One has a wee chrome badge low down on the wing between the front wheel and the door which states the figure '5.0'. This proclaims to the knowledgeable that underneath the bonnet lies a 5 litre V8, whereas, if there is no badge, there's only half an engine, i.e. a 2.3 litre, in-line 4 cylinder. And there was no badge on this one!

I have previously, but briefly, driven both cars back to back, but last year I spent a week with the V8 which was wonderful - http://www.jaggybunnet.co.uk/car-reviews/27-aug-mustang-by-ford/ .

This week the 2.3 arrived much to the 'awesome' (Gawd, how I hate that word these days!) delight of the neighbours' three small boys, and one big boy. But can it do the magic? With over 300bhp and a manual 'box, the potential is there. Or is it? I'll tell you in a wee while.

For now, grab the shades, turn up the Beach Boys, let the road unwind and let the good times roll ... 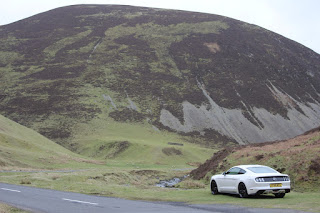