This fourth round of the world series celebrated its fourth different winner in the fourth different make of car when Thierry Neuville claimed his maiden WRC victory. He won the Che Guevara Energy Drink Tour de Corse by 54.7sec in his Hyundai i20, having crashed out of the lead in both Monte-Carlo and Sweden earlier in the year.

The Belgian grabbed the initiative on Saturday when Kris Meeke retired from the lead with engine problems and eased through today’s finale.

“The feeling is amazing,” he said. “Special thanks to the team, they have always believed in me and kept pushing me after Monte-Carlo and Sweden. I struggled a bit in the opening day and I wasn’t sure we could win this event, but we came back and turned it around."

Sébastien Ogier extended his championship lead to 13 points after passing Dani Sordo in the final test. Electrical problems slowed the Frenchman’s Ford Fiesta in the previous special stage to allow the Spaniard ahead, but he overturned a 2.5sec deficit to prevail by 1.7sec.Team mate Ott Tanak slid off the road on SS3, rejoining under Rally 2 rules and eventually finished 11th. Elfyn Evans fared little better. He initially had hydraulic problems through the opening day, then on the second day he slid off the road on SS6 with no chance of getting his DMACK Fiesta back on the road.

“It’s been a tough rally but a podium is better than nothing,” said a frustrated Ogier, whose victory chances ended yesterday afternoon with hydraulic problems. “We had no power and no handbrake on the last stage, lots of problems.”

Sordo’s i20 had 13.6sec in hand over Jari-Matti Latvala. The Finn threw caution to the wind in the final test to relegate Craig Breen to fifth by just a tenth of a second. An extra for Latvala was that fastest time earned him maximum Power Stage bonus points.

Ireland's Craig Breen was one of the few drivers to enjoy an error-free weekend in his Citroën C3 and he finished more than a minute ahead of Hayden Paddon.

Lying fourth going into the final stage, Breen emerged in fifth place: "This morning, the conditions were ideal once again, with beautiful weather and magnificent roads. Obviously, it's very frustrating to lose a position by only a tenth of a second, but that's also why we love rallying! I have no regrets, because I tried my best on the Power Stage. I have to be pleased with the weekend. We didn't make a single mistake and we held our own when fighting with drivers with a lot more experience than us. That bodes well for the future."

On an event which initially promised so much for Northern Ireland's Kris Meeke, there was drama to come. The Citroen driver was leading after the first day, but the car coasted silently out of SS6. When Kris and Paul eventually got the car back to service, the team confirmed their rally was over.

Having been there before, a philosophical Kris reflected: "Obviously, this is not the outcome I was hoping for, but it's part and parcel of the sport. In order for a car to go as fast as possible, there are tens of people who work on thousands of parts … and sometimes, it doesn't work quite as it should. In any event, this weekend has given me a huge confidence boost for the future. It was really special to lead this rally, which I think is the most difficult tarmac event. We know that our C3 WRC can win on all surfaces and that's what we’ll try to do in Argentina, and then in Portugal and everywhere else."

Now to South America for round five, the YPF Rally Argentina on 27 - 30 April. 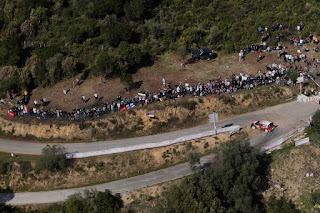