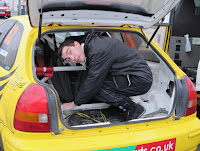 The immigrant crisis in Calais is not a new phenomenon. This picture was actually taken four years ago in Wigtown ahead of the Merrick Rally when a ‘furrin’ crew with connections in Germany turned up to do the event and found a stowaway crouched in the spare wheel well.

When questioned by the Scroots and rally officials, the young man of questionable nationality claimed to be called ‘Gary’ and further tried to claim he was already a UK passport holder – but didn’t actually have it with him.

Doubts were cast on the veracity of these claims by his German ‘accented’ English while the garments he was wearing displayed ‘Sparco’ labels, a well known manufacturer of sports clothing - from Italy! Say no more, nudge, nudge, wink, wink, know what I mean?

When asked how he had come by such garments, he changed his tune and said he was actually an AA man and had climbed aboard the wrong yellow coloured vehicle by mistake after a breakdown on the M6 north. He exacerbated the seriousness of his predicament by going on to assert that he had been kidnapped by the owner of said vehicle.

He was sentenced to 6 tests of speed and endurance in the forests of Glentrool by the Stewards and completed the course in a time of 52 minutes and 9 seconds (in 49th place overall) thereby earning himself a temporary resident’s permit.

His current whereabouts are unknown although it is understood that he was looking for a house of learning and culture in a far eastern place called Yooniver City. I’m sure we all wish him well in his endeavours.
Posted by John Fife at 21:09