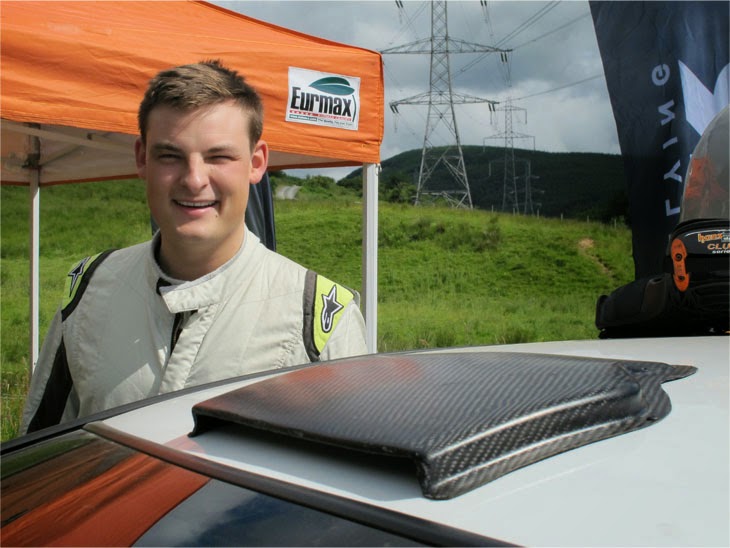 Standing in Greskine Forest this morning with plumes of stoor rising above the treeline was reminiscent of Scottish Rallies of old - sunshine, stoor, stones, midges, clegs - and rally cars.

Graeme Schoneville was 'testing' a new piece of kit on the Honda. A roof scoop. Now don't laugh, this is serious. On the recent Jim Clark Rally, him and Michael were liked baked potatoes at the end of some of the stages, and even the service crew poking their heads in the door were amazed at the heat being generated inside the car. Hence the roof scoop. We'll see if it works this weekend.

The Japanese visitors had a rather abrupt introduction to Scotland. Testing their Honda Civic yesterday they ran out of road and encountered one of the more substantial pieces of Scottish terrain and broke a hub. That meant an overnight job for the EuroRallye boys.

Derek Connell broke a driveshaft in the Suzuki engined Corsa this morning and had to fix, but better here than on the first stage tomorrow!

Neil Matthews in his 1600 Nova was at the test session this morning: "I'm glad we came, I've got no grip at the rear." When the crew took the rear whels off both rims were scored and marked inside, so it wasn't just stones. Something was rubbing on the wheels so the boys attacked the stone guards with hacksaws. "I haven't been in Scotland since the Jim Clark in 2009 then I did it this year," said Neil, "but this will be my first time on Scottish Gravel." He added: "I need a win this weekend in the BRC Challenge, Richard Sykes has two wins from two events, so if he does it again this weekend I might as well go home!"
Posted by John Fife at 14:34