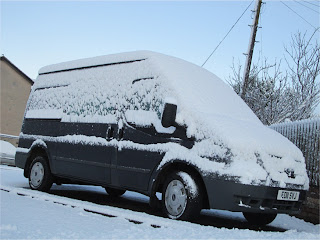 Scrape – Scrape – Scrape, the sound of Winter.
Smugness is watching the neighbours scraping windshields on a frosty morning with their free plastic giveaways from dealerships or failing that their budget bucket scrapers bought from Halfords.
Additional smugness is starting up the Transit and switching on the ‘Quickclear’ heated windscreen. Within minutes, the glass is ice free and the snow is swept away with one sweep of the wipers. 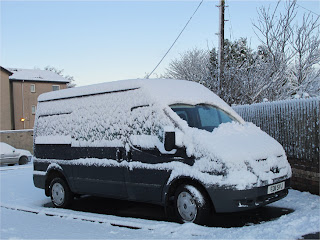 Then smugness turns to dismay. The radio is reporting that the M74 is blocked due to a jack-knifed lorry, the M8 is traffic-bound heading into Glasgow and there’s all sorts of wintry mayhem eastbound at Shotts. Even worse, the M6 is shut at Shap, so bang goes a visit to Millbrook this week to drive Mercedes-Benz Unimogs!
And that’s the problem with Winter. No matter how much we all prepare with winter tyres and shovels in the boot, or even buying a 4x4 just for the Winter months, the trouble is we’re all at the mercy of the guy or guyess in front. If they get stuck, the rest of us are going nowhere.
It was the same last Winter, the gritters were so late in getting out at times even they couldn’t get through the roadblocks of people stranded ahead of them. And even when the gritters were ahead of the game the snow was falling so thick and so fast, it was covering up the cleared and salted roads.
After two such Winters you’d think we’d learn. The only people with a smile on their face are the tyre manufacturers and fitters, flogging Winter spec tyres faster than tickets to Santa’s Grotto, and knowing full well we’ll never get the use of them because the nutcase at the head of the traffic jam and causing the hold-up, didn’t, and is sitting there adding polish to the ice with his/her spinning wheels!
But here’s an idea that could solve our wintry driving at a stroke. We have the technology, we just don’t know how to apply it. For instance, have you bought a steak bake at Greggs or a steaky pie at the local chippy recently. Did you burn your tongue? Even if you leave the delicacy sitting on the passenger seat for half an hour before pulling over to eat it, it’s still like biting into hot lava.
All we need to do is apply that technology to laying tar and we’ll have snow free roads for weeks. Move over TTTTTTTarmac, make way for pastry.
Posted by John Fife at 16:17