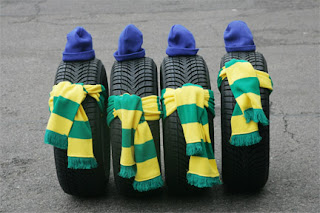 It’s cold outside. In fact, it’s bleedin’ freezin’. The tits are frozen to the telephone lines, the squirrels are frozen to their nuts and if I hear the kid in the office say “Cool” just one more time, I’m gonnae gie him such a clout he’ll need an icepack round his gub. Catchphrases are one thing, but endless, constantly repetitive pointless bloody sayings are driving me up the wall!

Anyway, as I said, it’s cold outside. That probably has something to do with the fact that ATS Euromaster have claimed that sales of cold weather tyres trebled between September and November this year compared to last year. And this on top of a ten-fold increase the previous year.
Apparently, sales are still on the rise with demand reaching unprecedented levels in parts of the country already affected by snow and ice.
Other tyre manufacturers are also claiming increased sales, but many sizes have already sold out!
Cold weather tyre prices start from just £174 for a set of four.  Storing four summer tyres in an ATS Euromaster tyre hotel costs just £30 (£7.50 per tyre).
Worth a thought, eh?
Posted by John Fife at 14:40