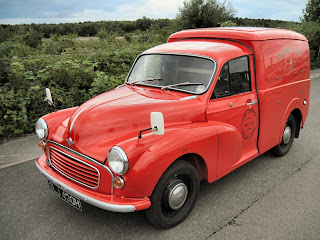 I’ve just been over at the main sorting office for the Royal Mail to join the growing queue of frustrated ‘customers’ clutching their little cards, which were earlier stuffed through letterboxes, and which have advised ‘recipients’ that items need to be collected in person because the postage was underpaid - plus a £1 handling charge!

This is all a sly government plot to stimulate the economy. They want to persuade people to get out of the house to spend money on fuel and fares to keep the garages and transport companies operating. In this way, they are also hoping for a spin-off for the coffee shops and snack bars as people take an unplanned trip through shopping malls and past desperate shopkeepers.
But there’s more to their cunning plan. Postal planners are counting on folks not being in, so overweight items are left at the sorting office, allowing more overcharge cards to be carried which are lighter than the mail to be delivered. That means less mail in the postie’s bag and more ransom demands. Your mail - or your money?
Even more devious are the weight and size limitations designed to catch out the unwary, charge the senders more, and the recipients much more. The maximum weight for a letter is 100 grams – do you have anything in your house that can physically weigh 100 grams? How do you judge if 4 bags of crisps weighs more or less than your letter? If you want to send Santa a letter in an envelope, that’ll be fine, but if you want to include a list along with the letter and the envelope, that will be overweight and more expensive.
It’s the same with the sizes, anything bigger or heavier than a letter is a packet and costs a packet to send. The thickness limits have been carefully assessed too to ensure you can’t send CDs without paying extra.
Even if it’s just a smidgeon overweight or oversize, it won’t get past the smidgeon detector and this is where the modern day highwaymen have played their most underhand trick. Paper absorbs moisture and therefore its weight increases. Those water sprays you see in sorting offices aren’t for the plants or the sticky labels, it’s to spray any mail close to the limit to make it heavier and merit an undercharge card!
It’s a dead sneaky way to extract more of our money, because if this morning’s queue was anything to go by, Royal Mail will be generating quite a few extra quid per hour as weary folks succumb to the cunning plan to claim their mail. And it gets worse, after paying over the dosh, the card is from someone you don’t like.
It’s all a government plot to get the economy back on the move and to get people out and about spending money they don’t need to.
Is there any more insidious way to generate income to pay students supplementing their income with Christmas jobs and fund Government trips to expensive, pointless meetings in Brussels?
It just goes to prove, nothing is more certain in life than death, taxes and - postal charges.
Posted by John Fife at 15:46