Rally - Care in the community

Some concern was being expressed by worried observers in the Service Area at the Galloway Hills Rally with regard to the welfare and well being of one Bruce McCombie Esq when he was spotted with Trigger's broom. Some folk wondered if he had been sweeping the streets to raise cash to feed his Ford Focus WRC while others thought he was only there for 'sweeper car' duties. It was Scrutineer Jim McDowall who set the record straight when he said they were all wrong, it was just that Bruce had got his Curling Bonspeil dates mixed up with his rally dates! 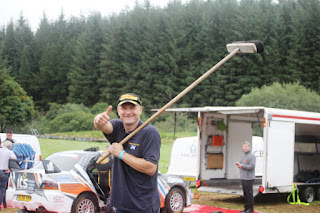