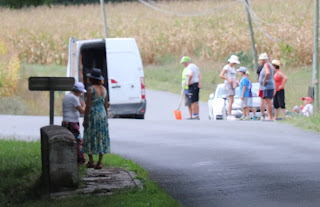 As promised, it's time to get back to rallying - well sort of. It may surprise you to know that the 'jaggybuunnet.co.uk' on-line magazine covering Scottish rallying continues to attract interest from ever more faraway places. To cope with this growing international demand, it now has a foreign correspondent (currently marooned in France - topp man), where a worrying development has come to his notice.

Whilst exercising French social distancing - you now have to be at least a metre apart to blow a kiss on both cheeks - our peripatetic reporter spotted an unusual sporting occurrence and paused to take notice. A man with a white van arrived at a public road intersection and parked up on the verge. He jumped out wearing a hi-viz vest and brandishing a bright red shovel.

Apparently this official personage's duty was to prevent traffic from the side road joining the main thoroughfare as a cycle race was coming by and he was the official road closer! Motorsport UK please take note. There was none of this road closing and opening convoy of cars full of officials business, a legion of Corps Urbain officiers and Gendarmes, road signs and arrows galore with armies of Marshals. Nope, just a man with a van and a shovel. 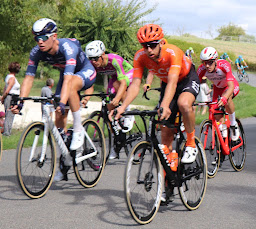 Formerly based in Coltness  'Bear' country and a Coltness Car Club member of long standing, our intrepid correspondent was even more disconcerted to notice the Polish branch of 'CCC' has apparently switched from horsepower and cars, to pedal power and cycles in these motor sport restricted times.

This 'Le Club de Cyclisme Coltness' (CCC) was participating in a local French road race (ahead of the Tour de France) and showed allegiance to their hairier and less svelte Scottish counterparts with a deeper shade of burnt yellow team wear colours with the internationally recognised 'triple C' logo embroidered on their cycling shorts. 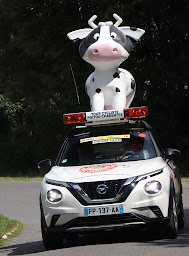 The Polish club have taken this a stage further. Instead of adopting the Bear as their mascot, they have adopted a rather more domesticated and politically correct bovine mascot which calls to mind an old Scottish saying: "If you want to drink and drive, drink more milk and stay alive'.

Anyway, never was our journalist's flabber more gasted than seeing this display of sweaty foreign Coltness flesh on public view. It fair put him off his battered and deep fried snails and frogs legs on toast.

As I said, Motosport UK please take note. The French have got more experience of closing roads than we have - and they have got it sussed. I mean, how many men with white vans do we have over here - and all they need is a shovel?

And just in case you think this is a wind-up, check the TV coverage of this year's Tour de France which concludes next week and is on just now. If you need more proof, Team CCC has its own website. However, in a bid to deny their questionable heritage they have manufactured a rather different back story, so it's up to you who you believe!

Now, would I tell you a fib?

P.S. Apologies for the quality of the pics - I'll have a word! 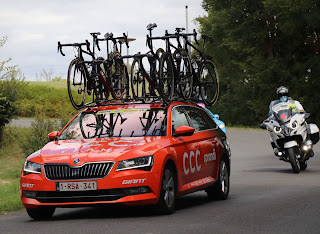