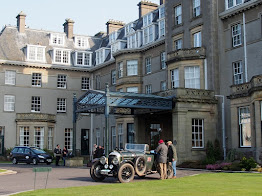 With regard to yesterday's post, may I apologise for the outbreak of sentimentality. That was down to the unexpected and earlier than anticipated  arrival of the latest addition to the Bunnet clan.

This is not usually a page for domestic or family matters, but events determined otherwise and I would like to thank one and all for the kind words and best wishes. Thanks too for the advice - well, some of it!

However, a word of explanation might be in order.

Since Junior's arrival had been decreed by the professionals to be on the 19th of this month, the family took the decision to have one final wee trip out with a treat last Sunday before the big day was due. 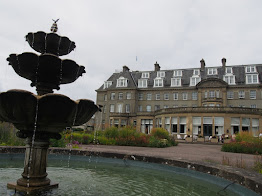 Accompanied by Lady Bunnet and the Maw and Paw-to-be, the foursome set off for the grey and imposing pile which sits amidst golfing's finest greenery at the head of Glen Devon for a socially distanced, relaxing and posh afternoon tea. Sated and refreshed, a gentle walk round the gardens was called for as a token gesture to the excessive consumption of dainty sandwiches, wee scones and teeny cakes.

A grand day out.  Everyone happy and content. Apart from one. He had other ideas. Perhaps having missed out on such a sumptuous repast he was hell bent on making an entrance.

On Monday morning, the Doc was called and a visit to the Hospital was recommended for a check up at Noon. By mid afternoon the bold lad was making his bid for freedom. On Monday evening, the job was a good 'un. A very 'unBunnet-like' early arrival. Three weeks early in fact.

He weighed in at 7lb 11oz. The new parents have a name in mind but that has yet to be announced. The main thing being that both Mother and Child are well and Dad is fair exhausted.

There is however just one area of concern. The new lad's Dad is a footballer and fan - and his Grandfather isn't! Anyone got a baby rattle that sounds like a BDA?

Anyway that's enough of such matters It will be back to motor sport shortly - very shortly.