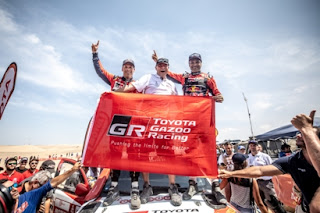 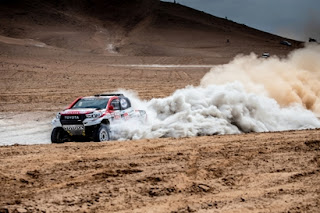 Toyota Gazoo Racing SA led the car category of the 41st edition of the Dakar all the way with Qatari Al Attiyah heading the field from the third day. This year the event took place entirely within Peru and produced some of the most gruelling tests the rally has witnessed since locating in South America.

Al Attiyah, twice a previous Dakar winner, said: “We are so happy to win, not only for ourselves, but also for Toyota and the entire Toyota Gazoo Racing SA team. Everyone has worked so hard for so long and really deserve this.”

Team Principal Glyn Hall said: “This victory was long overdue. Winning the Dakar is never easy, there are a lot of people trying. This year’s race was no exception and it brought a rollercoaster of emotions and results for the team.” 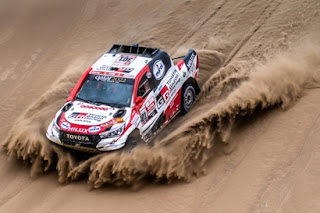 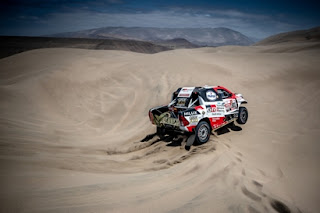 The team recovered from an early setback when the Hilux of Giniel de Villiers and Dirk von Zitzewtiz hit a rock in thick dust on stage three, and fell out of contention. Team-mates Bernhard ten Brinke and Xavier Panseri suffered a similar fate the following day, prior to retirement on stage eight.

The Hilux was also the first petrol vehicle in its class to take victory since the start of the Dakar’s South American era, being powered by a mid-mounted, normally aspirated V8.

An electrical fault cost Sebastien Loeb around 30 minutes in his privately entered Red Bull sponsored Peugeot during stage seven and he dropped out of contention.

Interest will now turn to Monte Carlo next week and the pressure will be on for Tommi Makinen's squad to do the business. No pressure, eh?