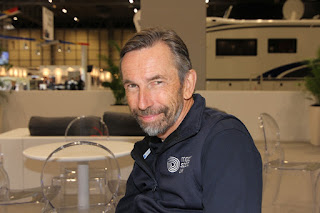 There's a new man at the helm of British motorsport. In fact he's only been in the job little more than two months. Even so, I thought it would be interesting to have a chat with him if I could. Some folk thought it was a bit too early to have such a chat, but I thought differently. Having looked at what he has done and has achieved so far and knowing he was a pal of David Richards, I reckoned that he would have had a good gurry around and a serious think about the job before accepting such a challenge. I was right. He's actually been beavering away behind the scenes for nearly a year.

Nobody achieves success in such mass appeal and revenue driven sports as the World Rally Championship, Formula 1, Olympics and World Championship Cycling and Sailing without being good at the job, but then Hugh Chambers comes from, in my mind, an exalted bloodline. He's the son of Marcus Chambers, arguably the man who introduced professionalism and the desire to win (not just 'take part') in British motor sport.

I first became aware of Marcus Chambers when he was BMC (British Motor Corporation) Competitions Manager in the days when the Austin Healey 3000 as driven by Pat Moss and the Morley brothers was winning rallies, and also the car driven by my first rallying  hero, one Timo Makinen Esq. Later he went to work for the Rootes Group to help make the new Sunbeam Tiger competitive, and also the Scottish built Hillman Hunter that won the 1969 London-to-Sydney Marathon driven by a certain Andrew Cowan, Colin Malkin and Brian Coyle.

At this early stage I was more interested in his plans going forward, but even when I switched off the recorder he wanted to keep chatting and I only wish I could publish his 'off the record' comments. However, despite what some folk might think, I know when to keep my trap shut (at least most of the time) but I hope he will grant me another, and longer, interview six or 12 months down the line.
He did say that we shouldn't expect any big changes this coming year, but from 2020 onwards he would expect such change to begin to affect motor sport.

On that basis, the interview provides more of a general introduction to the man rather than an in-depth interrogation of what has to be done, but what we all have to bear in mind is that motor sport is under the biggest threat it has faced in years.

Rallying as we know it now is just about finished. That has nothing to do what has gone on in the past, but more a realisation of what lies ahead. As Hugh touches on in the interview, we are facing big threats from the anti-fossil fuel brigade, the gradual withdrawal of petrol and diesel as sources of energy and the introduction of electric motors and driverless cars, not to mention pollution, noise, the use of other resources, and access to forests and closed public roads. And then of course there is the increasing cost of participation, ever stricter domestic regulation and the need to attract new competitors, officials, Marshals and excite a new generation of spectators.

So what I have done is published the full Interview (in 3 parts!) in the on-line mag, virtually word for word, and let you all make up your own minds. I for one am encouraged. For the first time, the motor sports governing body in Britain has a commercial brain with experience of marketing, promotion and organisation at the helm. For too long motor sport's governing body has been led by lawyers and accountants to the detriment of the wider picture and the sport's development. Other sports have long left us behind as they evolved and adapted to modern times. For too long British motor sport has spluttered along with the handbrake still on. With a bit of luck the new management has now found out how to release the handbrake and work out which pedal is the accelerator!

But is it too little, too late? Fingers crossed, eh.