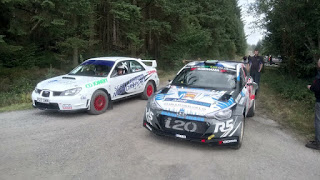 Busy session this afternoon at the 1. 7 km test stage ahead of tomorrow's rally and Borders TV has just turned up. Pity we'll only get a preview tonight and no televised report tomorrow! Such is the sport of rallying.

Bruce McCombie will be pleased that he came along today. He's blown the Lancer's turbo. Apparently it was reconditioned before the Grampian, so he's not happy. Brother Scott is birling round the stage good style despite complaining about his Lancer's clutch. According to the service crew the clutch is fine, the fault is in "his heid". Speaking of birling, I'm surprised John Wink isn't dizzy the number of times he's been round in the Hyundai. But then he's got Mat Edwards sitting beside him, so no doubt there will be a bit of instruction going on and advice being given. Mat's also co-driving tomorrow as John Forrest is sitting in with his wife Aileen in the family Lancer and we all know how that ended up the last time he co-drove for the Missus. On it's roof.

Willie Bonniwell was trying out Gus Kennedy's Impreza on the loose with Fred adjusting the suspension and brakes to get it handling the way Willie wanted. Anyway he's away now and happy - apparently it's handling like a Mk2 Escort! It was fishtailing like a kite in a tornado under braking at the finish of the stage but he's happy.

Alan Dickson obviously had a fruitful day. "We've been messing about with suspension settings all day and learned one thing - we should have left them all the way they were." He also tried a couple of practice starts with his 'launch control' - "That went well too, after telling everyone to stand well back - I stalled it." As you do.

Greg Pollock is having his first run out in the Mk1 for 5 years. He lives in Canada these days and brother Willie keeps the car here so he doesn't get much chance to drive it although Willie makes sure the cobwebs don't grow on it. Anyway, his Canadian girlfriend, Alysaa, is over too for her first run in a rally car. You can tell she's Canadian, she's wearing a tartan lumberjack jacket cos she says it's cold over here. And this from a lady who comes from a country with polar bears!

Oh, and it's still awfy stoory, but rain is forecast for tomorrow.
Posted by John Fife at 22:28