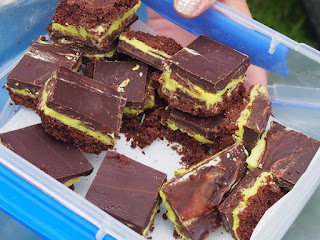 There is a hidden danger lurking amongst the service vans in the services areas of Scottish rallies. Home baking. This unlikely threat to one's wellbeing - and waistline - was highlighted last weekend in Galloway. As ever, the weather played a part. When it's damp, dreich and gloomy, folks tend to be more friendly and helpful. It's the Scottish spirit. We're used to this weather and lift each other's spirits with good cheer and banter. And what better way than with home baking.

A trip to the Solway Coast or the Galloping Hills each year only adds to those regular on-event perils. At the Solway Coast signing-on, there is always a splendiferous display of tray bakes and cakes, sponges and biscuits upon which competitors feast as they queue up to complete their paperwork. And there lurking in its midst is sugar in its most deadly form, Marilyn McMath's tablet. This has to rival the sumptuous succulence of Rhona Dickie's fare which is available only to those who have access to the Junior 1000 Challenge marquee at the rallies of the weans.

It's the same at the Galloping Hills where the King of Scones takes its place amongst the cakery at the rally HQ cafe, Cruella's Rock Buns. Bun? Scone, Shortbread? Who knows what it is, but when she's not managing the Haugh of Urr rally factory, Isobel Riddick is the Aga Queen of the south west.

There is tablet on offer too amongst the service vans, and Mark McCulloch's Mum, Irene, is to be avoided. One taste of her tablet results in a lifetime addiction.

But still, the peripatetic wanderer is not safe. Most of the vans have home produced fayre in tins and tupperware to feed the hordes and provide the necessary sugar rush throughout the day. This generosity is often extended to various friends and passers-by, and the occasional reporter. And there's always a cup of tea or coffee on the go somewhere to wash away the evidence of over-indulgence. Aye, dangerous indeed.

And it was here that a new treat made its debut. Shona Hale's white chocolate cheesecake. Just one thing - or three. It had no white chocolate, cheese or cake. The chocolate was burnt almost black, the filling was neon coloured mint toothpaste and served up on a bed of Doc Marten sole. At least that's what I tried to tell myself to stop me eating more. The dark chocolate was exquisitely smooth and sweet with just a hint of bitterness countered by the wicked soft melting mint butter cream served up on a firm, yet crumbly, biscuity base. And she's a good co-driver.

There are bakers in abundance in Scottish rallying that would put all of Paul and Pru's tent based show-offs and pot lickers in  the shade when it comes to feeding the sporting stars of the rallying world.

And here's a thought, instead of a glamorous jamboree awards night in a hotel at the end of the season, the Scottish Rally Championship could do a lot worse than hire a big marquee in a field and host a 'Ladies of Rallying' baking competition. One thing's for sure, we wouldn't need an outside caterer to feed the guests and there would be no drunken shenanigans - everybody would be weighed down with cake!