If anyone wants to learn how to run a special stage rally, they couldn’t do much better than come to the south west of Scotland for either last month’s Solway Coast Rally or this weekend’s Armstrong Galloway Hills Rally.

At Scrutineering tonight a number of co-drivers commented on the quality of the paperwork while most folk noticed the well arranged queuing system for Scrutineering – better than any Post Office could manage. Does anyone remember proper Post Offices? Anyway, that’s not just down to the efforts of the three local car clubs, Solway, South of Scotland and Machars but also to the efforts of the ‘Haugh of Urr Rally Factory’ as the Riddick household is known locally.

One crew that didn’t make it to Scrutineering was the Mitsubishi duo, Bruce McCombie and Michael Coutts. The Lancer blew its turbo earlier at the Test day, but when they took it off, the boys found some bits of it in the sump, so the car was pushed on to the trailer!

Had a brief chat with Ford Fiesta ST newcomer Finlay Brock. He did a few Scottish Tarmack events last year but then went looking for something else. This year he’s been contesting the Flanders Rally Championship in Belgium. “It’s cheaper going to Belgium than Ireland or the Isle of Man,” said Finlay, “we drive down to Dover, have a 35 minute trip on the train through the tunnel and then it’s never more than  a3 hour drive to Belgium depending on which event we are contesting. We leave at mid-day on a Friday, recce on Saturday and do the rally on Sunday returning early doors Monday.”

He added that noise checks and Scrutineering are quite relaxed, the organisers helpful and the fans are enthusiastic. He can get two events out of one set of tyres and he reckons that it’s cheaper doing events in Belgium than getting the ferry across the Irish Sea. There is one other bonus. If you have a bump or break down there is invariably a group of spectators nearby with a barbecue and a supply of beer. And they can be generous, very generous, perhaps too generous! Worth a thought, eh?

Oh, and did I mention it was stoory at the Test day, very stoory? 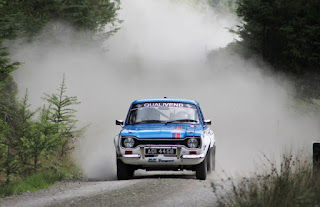 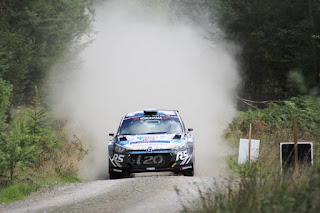