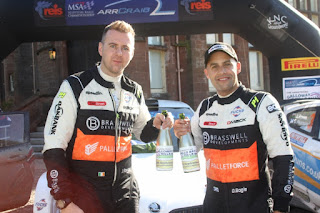 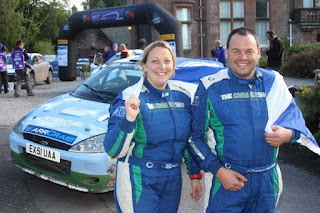 David Bogie won today’s Armstrong Galloway Hills but Andrew Gallacher won the 2018 ARR Craib Scottish Rally Championship crown, a task made much easier when Donnie MacDonald slipped off the road on the opening stage of the day. At that point, the title was his and he just took it easy – well, a relative term by Gallacher standards. It was rumoured that he executed a do’nut in Stage 2 but if the MSA reads this, it was actually a 360 degree spin in very slippery conditions. Co-driver Jane Nicol added to the celebratory air with a Saltire flapping from the top of the roll cage out of the door.

Conditions were grim at the start of the day with mizzle (miserable drizzle!) soaking the air and wetting the stages. Good for keeping the dust down, but adding a treacherous layer of slime the dry gravel roads. It also caught out a few crews whose screen demisters couldn’t keep up with the condensation inside the cars. But then it cleared, and for the afternoon tests the sun came out.

But Donnie was already out: “It was a straight piece of road and I was in the middle of it all way,” said Donnie, “but there was a corner at the end and I clipped a rock. I wasn’t going fast and it just slid into a hole. My big mistake was thinking I could just drive out of it, when I should have stopped and reversed.”

Meanwhile back at the front David Bogie was setting the pace first time out in a new Skoda R5 in preparation for next month’s Wales Rally GB: “It was just about getting back into gravel today,” said David, “after so many tarmac events, it’s all about Rally GB now, my focus is on that.”

45 seconds behind him was Garry Pearson and happy with that: “It was all about getting back on the pace,” said Garry, “I was just 3 seconds off David on that last one, so I’m happy with my pace, it was getting better all day.”

Jonathan Greer was third: “At the start of the day I didn’t know what to expect,” said the Ulsterman, “I don’t mind tarmac if it’s wet or dry, but Gravel’s different. I’m happy enough with third.”

John Wink snatched 4th place ahead of Jock Armstrong and Fred Milne rounding off the top six. Mark McCulloch was 7th ahead of a somewhat subdued Gallacher with Keith Morris 9th and Greg McKnight taking the top 2WD award in 10th place with his Mk2.

One again, young Keith Riddick put on an impressive show with 15th overall in the 1600 class winning MG ZR while Scott Peacock took the 1400 class in his MG.

Michael Binnie lost out on a strong top ten finish when his Lancer slipped off the road in Glentrool while Ian Baumgart went one better and cowped his Subaru in the first stage.

Amidst the celebrations at the finish there was a rather poignant note as Andrew reflected on a remarkable record. It was the first time that the son of a former Scottish Rally Champion has won the national title. His Dad, Drew, won it 4 times, first in 1973 then a hat-trick of wins in 1978/79/80. It was also rather nice that Mum, Sandra, was there to greet him at the finish too. This was Andrew’s first title. Could the twice Scottish Saloon Car Racing Champ do it again? 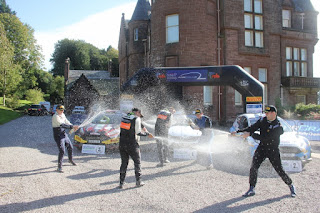 (There will be a full rally report in the digital mag later in the week: www.jaggybunnet.co.uk)
Posted by John Fife at 18:51