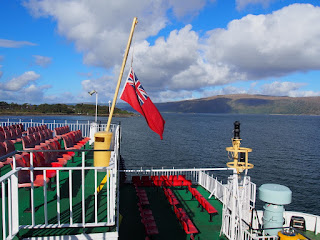 Many new people have been introduced to this Blog over the past 48 hours – for all the wrong reasons, but here’s a good one. John MacCrone is on the mend. His prospects are much more positive and hopeful after the initial on-site assessment of his injuries on Saturday. So we can be thankful for that.

As to yesterday’s poem from Calum Duffy, I gave it no introduction. It didn’t really need one, but for those of you who don’t know, Calum is a Muileach and both he and John are from the same village of Dervaig on the Island of Mull. Calum is also regarded locally, and more widely, as something of a wordsmith and poet, and over the years he has written some beautiful and evocative prose inspired by his life, his work, his sport, and the Island.

Calum plays it all down and says it just happens. Yesterday was no exception. That poem was written on Sunday morning. In fact, I spoke to him after the gathering and offered to do a swap. He should write rally reports and I should drive his rally car. Oddly enough he didn’t take me seriously!

He can drive a bit too. He’s actually won the Mull Rally 8 times in the past although this ninth ‘victory’ will not be one to savour.

And whilst we mourn the loss of Andrew Mort, let’s not forget that Chris Lawson’s family and friends will be grieving too this week (see earlier post).

All sport is dangerous, from riding a horse or riding a bike to driving a car or driving off the tee (over 30 people are struck by lightning each year!), but then life is dangerous. You either accept the risk, or stay at home. As a good friend once said: “We’re here for a good time, not a long time!”

And can I leave the last word to others. Regardless of the ongoing politics and business bickering at boardroom level, the actual staff on the CalMac ferries are a pretty good bunch. On the ferry home earlier today the red ensign was flying at half mast as a mark of respect to lost lives. It will stay that way until the last rally crews have left the island. We’ve seen this once before, let’s hope we never see it again.
Posted by John Fife at 17:23