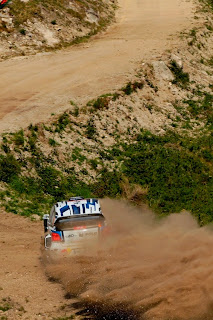 26 seconds cover the top six drivers at the end of Day 1 of Rally de Portugal with Volkswagen drivers first, third and sixth. Latvala leads from Mikkelsen with Ogier in sixth place.

Ogier suffered from running first on the road followed by Mikkelsen running third and Latvala getting the best of it, ninth in order.
Latvala commented: "I was a bit slower on the opening stages, but found a better rhythm as the stages went on and went on the attack more and more. On the third stage of the day I seized the lead and kept on extending it. Conditions weren't easy, it was very sandy and there were lots of stones on the track. No doubt the starting position helped us today."

Ogier certainly wasn't downcast: "Julien and I are happy with our performance. We were a bit unlucky with a puncture in the morning right on the first stage. That cost us a few seconds and ruined my tyre strategy. After that I couldn't drive with four soft tyres on the following stages as planned. Then in the afternoon our times were really strong when you look at my starting position. We hardly lost any time to Jari-Matti Latvala. Despite that it will be difficult to fight for the win, but I'm not giving up."
Posted by John Fife at 23:48