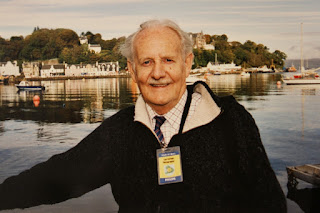 Even if you didn't know him or ever met him, rally fans will have seen his work. Tom Coffield was an integral part of the Scottish rallying scene for over 40 years, firstly as a competitor and latterly as a motor sports photographer. Sadly, he passed away last Friday (19th Nov.).

In actual fact, Tom's day job was plumbing and he operated a successful plumbing and heating business based in Crianlarich and the surrounding area till he retired, but that gave him more time to pursue his other great joy in life, photography.

He got involved in motor sport some time in the early 1960s through friends in the Perth based 55 Car Club. Initially, he competed on navigational events, trials, autocross, sprints and hillclimbs first in a Sunbeam Rapier and then a Mini Cooper.

It was another 55 CC member, Arthur Jasper who suggested that he might like to try stage rallying with the Mini. He actually competed on the first ever Mullard Tour of Mull Rally in 1969 with Martin Cruickshank in the Mini and they finished 31st overall but already realisation was dawning. To be competitive, required something with a bit more poke.

He bought his first Escort 1300GT in 1970, later replaced with a Mexico and an RS1600, and went rallying with regular navigator Ron Adam, or sometimes Neil Fraser who was later to become his son in law. He still participated in the many and various motor sporting disciplines that were a staple part of club motor sport in those early days and also served time on the committee of 55 Car Club putting something back.

It's fair to say he was never a front runner, but that was down to budget and time, running his own business came first, motor sport was his escape.

We'll never know how good he could have been, but in the 1972 Shell Scottish Rally Championship he finished 29th equal in the points standings at the end of the season. In 1973 he scored a top twenty finish, this time 19th equal.

In 1975 he called it a day, but he wasn't finished with rallying. He had time for another hobby which was easier to manage alongside his 'day job', photography and thereafter he specialised in capturing the action primarily on stage and classic rallies as well as many other forms of motor sport.

In the days before digital photography, motor sports photographers were a much smaller and more exclusive band of hardy folks who followed the sport and Tom fell in with a 'bad crowd' comprising variously of Jim Barclay, Alistair Farquhar and Iain Wallace amongst others.

Jim of course was more of a videographer and therefore required different locations to film the action compared to the needs of stills photographers and there followed interminably vociferous 'Jack & Victor' type discussions about where to go, how to get there and which was the best spot.

But that was Tom. In his element with his camera, a flask, some friends and a box of corned beef sandwiches, and he was ready for anything.

The sport has lost another great pal and our thoughts must be with his family at this very sad time, daughter Jane and the two boys, Neil and Tom Jnr and all his wide circle of friends.

The funeral service will be held in Killin Church (Main St, Killin FK21 8TN) on Thursday 2nd December at 11.00 am.

Note: There is a more detailed, full version of this tribute here:

(Thanks to Tom Coffield Jnr and Alistair Farquhar for the pics)