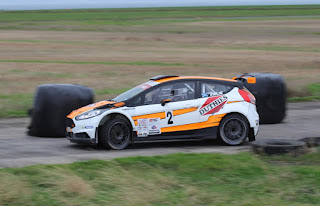 That's the main report from the penultimate round of this year's Marshall Construction Scottish Tarmack Championship now published in the on-line mag. It very much looks as though Alistair and Colin Inglis can't be caught for the title.

Only the best four scores from the six round series count towards the final points tally with a huge score from the double points scoring Mach1 Stages opening round putting them just out of reach of the pursuit.

These points will be confirmed following the conclusion of the series at the Annabelle Tennant Stages Milltown Rally on 21st November.

There's also a report from the Junior 1000 event at Crail in the mag. With one round to go Archie Swinscoe can't be caught and will be crowned the new Junior Champ at the awards night in January.

Also, whilst at Crail, there was a wee bit of scandal, gossip and news to be found, which might just be enough to compile into a wee newsy roundup feature and inject a little bit of colour back into the sport in these strange Covid afflicted times.