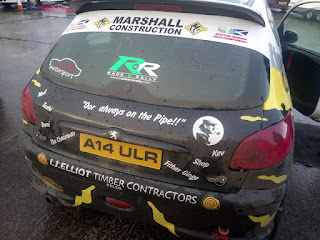 Although my Big Pal Jaggy wasn't physically present on Mull for the rally last month it  would appear that he was there in spirit. Apparently his very dear friends - sorry, that should read - very cheap friends Des Dastardly and Craig Muttley had contrived to carry his effigy aboard their sporting Pigeot wagon as a rallying call to the poor, the oppressed and the underprivileged of that far off land.

There on the wee beastie's rump at Crail was an image scary enough to frighten small children and traumatise anyone who got too close to the rear end, and indeed ensured that Scroots also kept their distance. It was accompanied by that most threatening of bloodcurdling war cries inscribed across its flanks, "Oor always on the pipe." 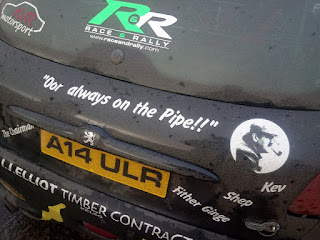 According to local Duns worthies, and more than a few worthlesses, this is a saying which roused and fired up the Border Reivers across past centuries. These fearsome and feared bands made frequent and bluidy forays across the border and had a penchant for robbing, rustling, raiding, pillaging and arson, in other words a typical Friday night in the bustling metropolis of Duns after a bevvy of barley mead and a cairry-oot of deep fried battered haggis cutlets.

Translated to the modern idiom, it simply means "occurring at a fast and furious pace" so no longer an incitement to violence and bloodshed. We can all sleep peacefully in our beds tonight, unless that is you hear the menacing Muttley chuckle outside your bedroom window when the full moon rises.