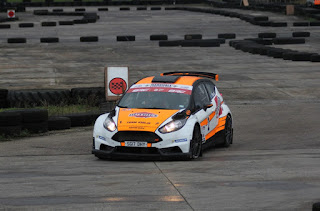 Nine seconds separated the winners and runners-up yesterday at the Kingdom Stages at Crail with Alistair and Colin Inglis overtaking Andrew Kirkaldy and Peter Carstairs for the lead over the final two (of 5) stages. The two Fiesta R5s had set a cracking pace over the well received Glenrothes MSC stage layout and were almost two minutes clear of the Subaru Impreza of third placed Barry Groundwater and Michael Hendry at the finish.

That gap might have been a lot closer had it not been for a lurid spin on the final stage which wiped the front bumper off the Subaru, but they had enough in hand to ensure that the younger Inglis, Greg, with Ian Parker stayed in 4th place in the Lotus. 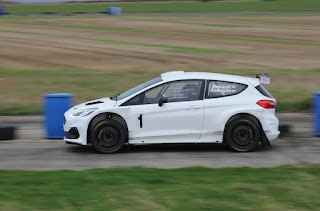 Ian and Allan Paterson were 5th in their Subaru ahead of Sandy Fairbairn and Ian Murray in the Mitsubishi. Andy and Alison Horne were in the hunt for a top six finish until a huge series of spins when the Metro hit standing water on the 4th stage. The front of the car suffered a bit of damage but was still able to drive out of the stage. However the incident caused one observer to comment that had they done it on Saturday evening, they would have scored a set of perfect tens on 'Strictly'.

John Rintoul and Ross Hynd didn't get far in the MINI, the rear diff grumbling by the end of the first stage with John thinking that it was a legacy of Mull! Lee and Cole Hastings didn't get far either, the Subaru's engine letting go while Chris and Peter McCallum's Scottish Tarmack title bid suffered a blow with diff failure in the Escort. 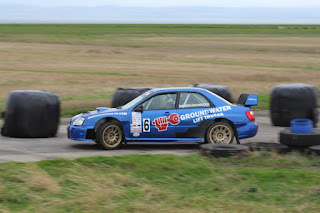 Best fight of the day? That would be the Class 1 battle where Innes and Kirsty Mochrie in the Metro squabbled over mere seconds with the Vauxhall Corsa of Chris Smith and Amy McCubbin. They went into the final stage, one second part and Innes just managed to snatch back another second from Chris to make the difference TWO seconds. Phew!

Des Campbell's pace in the Peugeot was electrifying as he and Craig Forsyth finished 8th equal overall and won Class 2 from Ewan Stanhope and Cameron Dunn in the Corsa who had earlier lost time in stages 1 and 3 with an overshoot and some acrobatics!

Archie Swinscoe and Barry Young won the Junior 1000 event in their Skoda Citigo from the Peugeot 107 of Max Speed and Alan Gilbert with Letisha Conn and Emma Morrison finishing 3rd in the Skoda Citigo.