Rally - Westwards Ho - or not! 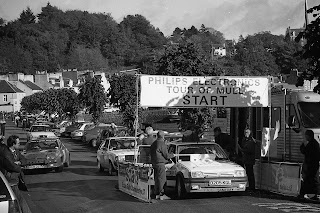 I’ll miss Mull this weekend. The first time I went was 1970. Back then it was a selective road rally. It attracted a fair number of adventurous souls to this 300 sq mile lump of water bound rock just off the west coast of Scotland on the edge of the Atlantic.

However it needed more than novelty value to survive hence the idea of introducing the original 'Motoring News' and Scottish Rally Championship status to try and boost prestige and numbers. Even back then in the 70s that didn’t go down well with the purists.

If it ain't broke, don’t fix it, was the motto then just as it seems to be now. But that simple saying shouldn’t stop folk trying to improve things. If we had stuck with the wheel we’d still be pushing hand carts.

In the same way the introduction of the British Rally Championship has roused feelings of anger and objection as well as generating genuine debate. However, we should remember that rally organisers can be every bit as competitive as any other organisation whether in sport, commerce or business. They all want to improve their event and perhaps even stamp their own personality on  it. That’s not wrong, but some folk see it as wrong.

Secretly there are many who would like to see stars of the bigger stage on the island taking on the established Mull locals and regulars. Jokes have been made in the past about the WRC stars getting a fright if they came here. Of course that's rubbish, if Ogier, Neuville or Evans came here now they’d wipe the floor with us. It might be a little different if they were put in typical Mull machinery like old WRC cars, R5s and fast 'modern' Escorts, but they’d still win, wouldn’t they?

However there is a fear that this was a step too far. That this could ruin the very attraction that makes this event so unique in the world of rallying. Mull is very different, even from other island events on Man or Corsica.

The Isle of Man may be 100 square miles smaller, but the population is around 85,000 compared to Mull's 3,000. Corsica is much bigger at 3,300 sq miles with a population of 338,000, but it enjoys the same unique appeal as any other island based motor sports event.

And yet Mull is different. It seems to absorb the rally as the population more than doubles for the rally weekend. Incomers outnumber residents, but the weird thing is, the 'two camps' become one - they're all rally fans and that starts with the schoolkids and insinuates itself into island life.

No doubt the diehards will say different. Mull doesn't need 'outside interference' from other championships and the preference offered to them means disappointment to some of those regulars who were denied entries.

Only time will tell if this was a good idea or not, but it should lay one beast to rest, can a rank outsider come here and win first time out? I don't think it has been done before, apart from the first winner of the first event George Hill in 1969, but not in the current era of cars, suspension and tyres. We’ll see this weekend.

There is one other change this year. There will be no island 'Murmurs' oozing out of the dark underbelly of this sainted isle, whispering tales of fact, fiction and folly as the rally passes through. Silence will reign. Here's hoping it's safe and successful for all.