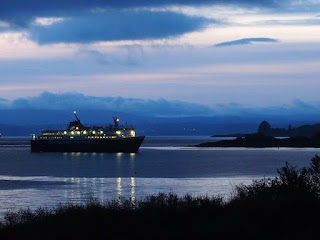 By all accounts this year's Beatson's Building Supplies Mull Rally was a cracker and it was relatively easy to keep up with progress via FB coverage and on-line results service.

Apparently this online system which relies on satellites, mobile phone coverage, the Internet and black magic is the way forward as decreed by the Bicester Brethren. But this was Mull, and phone masts are a rare species. Even the satellites had a hard time finding the place. The fact that it worked, and worked reasonably well is testament to the efforts of organisers, officials and Marshals.

As for the news and rally reports, the twa DirtFinch budgies did a marvellously garrulous job in extremely difficult circumstances. Say what you like but they did come up with some gems, like Jonathan Mounsey's pre-rally recce schedule.

Folk bemoaned the fact that they didn't go into the stages to see rally cars running, but that has more to do with the restrictions placed on the media by the Bicester Brethren than any lack of desire on their part.

Under the current MS UK media accreditation guide lines, it would appear that spectators have more freedom than signed-on media folks! At a time when the sport is under such severe threat and lacks wider public exposure they should be encouraging the media, not putting them off. I for one haven't signed up to their scheme which is not fit for purpose and I have told them why.

Similarly trying to interview all drivers at Service is well nigh impossible. If the crews were to arrange themselves in seeding order (some hope, eh!) that would be a big help, but teams were scattered all over the place making contact very difficult while some are awfy guid at hiding from prying eyes.

However, there were a few exemplary performances, among many! From 143rd (out of 149) at the end of the first stage to 5th place overall was an extraordinary achievement by Matt Edwards and Darren Garrod. I'll bet their adrenalin pumps were working harder than the Polo's fuel pumps. They almost caught Fergus and Craig Barlow, but didn't quite make it as Fergus hung the tail out to take 4th place by a bum-squeaky 6 seconds.

Equally impressive was Scott MacBeth and Neil Shanks' run into 6th place. Like Fergus in the Subaru, Scott hasn't had a lot of seat time in the Mitsubishi and I thought that was remarkable. Young Finlay Retson had a stormer of a result too, finishing 11th overall with Rhys Stoneman in the wee Fiesta, holding off the likes of Eddie O'Donnell, Garry Pearson and 'Montana' Morrison. That took some doing.

In 24th place were 'Dangerous' Des Campbell and Craig Forsyth in that unsophisticated home built but well engineered Peugeot 206 and they finished half a minute head of Billy McLelland and John Wood. That was a pleasant surprise too. Billy has a habit of 'over driving' shall we say, and rally finishes are a rare sight at times. In fact my earliest memory of Billy was on a Galloway Hills Rally some years back. He was the fastest man in the field over the first 100 yards of the first stage - until a square right intervened, the outcome of which was a the creation of a new firebreak for the Forestry Commission!

Speaking of modest but well engineered cars, it was a delight to see the Rover Metro of Innes and Kirsty Mochrie in 60th place at the finish while Beefy Fraser and Gordon Chalmers were 74th in the Avenger Tiger. Those are just some of the highlights, everyone else will have their own.

And there was surely a tale or two to tell by Stewart Dodds in 101st place overall. The former co-driver turned driver competed in his Vauxhall Nova with Mark McPherson and they finished in last place. The key word is 'finished' not 'last' as 49 crews failed to complete the distance. Those who don't know the event or the terrain can't appreciate how difficult it is to achieve a finish on this holy grail of rally competition.

What a rally, what a location, what drama. I'm just sorry I missed it, but that was my choice. Nothing to do with the rally, the club or the organisers.