Do co-drivers get a raw deal? 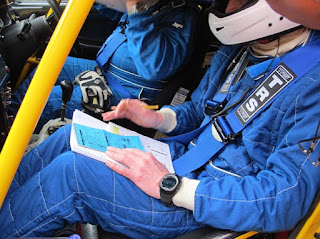 The question was posed following the weekly newspaper's feature on the Beatson's Building Supplies Mull Rally where the report mentioned only three co-drivers, Darren Garrod, Stuart Loudon and Grace O'Brien. Yes, they were all listed alongside their drivers in the Results section, but 23 drivers were mentioned by name in the same report. Given the nature of the challenge on the island is that a fair reflection on their contribution and effort expended?

It reminded me of a remark that was whispered to me at an after rally press conference when a Scottish journalist commented on Robert Reid's title after he won the World Rally Championship Co-driver award in 2001. The guy said to me: "What? He's won a World Championship title for reading out loud?"

Of course he was no rally journalist, he didn't understand the role of the co-driver. That role has changed significantly over the years while the role of the driver has remained the same. Switch on, fire up and go like a bat out of hell.

Way back in the early days a driver wouldn't have got out of the car park without a navigator. Roadbooks were unheard of. Navigators were given a list of map references and told to follow them (using OS maps) to find the stages. There was no written or diagrammatic route through the stages either, just follow the arrows. Oh and by the way stick to the time schedule or you get penalised.

Things have progressed and these folk are rightly called co-drivers these days, especially since the introduction of Route Notes and Pace Notes. Hence the question.

It's not only the weekly paper to blame. Looking at recent reports from the WRC on Dirtfish there is a distinct lack of co-drivers being credited. It's the same in Autosport, Crash.net, rallyinsight.com, rallyuk.net and various other on-line and in-print reports. Even the WRC television coverage appears to mention  co-drivers only when drivers change their partners.

Similarly there are quite a few press releases issued by 'media-savvy' professionals which don't credit co-drivers, merely list the drivers and their comments. The cars get more mentions on events than co-drivers!

Admittedly I was once guilty of the same practice, concentrating on the drivers and mentioning the co-drivers in passing, but I was pulled up by two co-drivers who asked the simple question: "Why?" I offered the stupid excuse of explaining that having to add co-drivers names slowed down the re-telling of the action and spoiled the narrative.

I now follow a different formula. When writing a post event report these days, the first time a driver's name is mentioned, the co-driver gets a credit too, thereafter I refer only to the driver. Admittedly I still don't mention every co-driver every time, is that wrong?

Co-drivers can be every bit as competitive as his/her driver and on the day expend the same effort and mental application. Prior to the rally there is the paperwork to sort out, time schedules to be perused and service crews briefed. Then there is the issue of Roadbooks and service plans to follow, time cards to understand and the various rules and regulations understood.

These days the job is further complicated by having to edit or modify the supplied Route/Pace Notes, or make your own where allowed, and spend hours memorising the DVD.

The question is, is it right and fair to highlight the driver's contribution and ignore the co-driver or just give passing mention?

Rallying is different from most other forms of motor sport in that there are two people in the car, not just a driver on his/her own.

Co-drivers have families and friends too (well, most of them do) and they would like to know what their Dads/Mums, sons/daughters, relatives and friends do at weekends, but reading some of the reports, you'd never know they were there. Who knows? Maybe they just bunked off to the pub and left their racing ovies and crash hat in the boot as an excuse to get out of the house.

Should co-driver names be relegated to a simple listing on the final results? Not for them the glory or the plaudits, just the sense of a job well done. Is that enough? Without co-drivers, rally drivers are just lost motor racers, is there an acceptable formula or do we just carry on? Something to think about, eh?