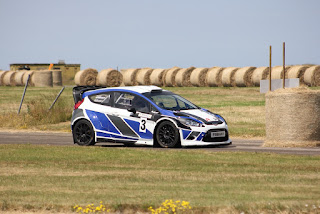 Derek McGarrity leads the Mach1 Stages overnight by the handsome margin of – 3 seconds! He had earlier built up more of a lead in His Fiesta WRC but the car has developed a slight but puzzling misfire. Derek said: “If there is any delay at stage starts, that’s when it seems to be affected. I can drive round it, but I don’t like not knowing what is causing it.”

Second time out in a Fiesta R5, Alistair Inglis has adapted surprisingly quickly; “It’s so easy to slide,” he said, “and if it starts to slide too far you just press the accelerator harder and it pulls itself straight.”

Gordon Morrison might have posed more of a threat to the leaders had he not spun off on the first stage of the day: “My own fault, I just got a rear wheel on the grass and the tail stepped out and I slid off into a ditch. I thought that was it but we got it out OK.”

Tom Blackwood is going well and was lying 3rd till Morrison reeled him in, and first time out in his Fiesta R5 Ian Forgan is 5th, but very lucky. He got a puncture on SS5 and stopped to change it, but the stage was red flagged and he was given a notional time, so he’s still in the running!

Bruce Edwards is the first non Ford holding 6th place in his Darrian ahead of the mighty impressive Kyle Adam in the Mk2 who’s giving it big licks around this vast facility at Machrihanish. John Bradley is 25 secs behind in another Mk2, the Paterson brothers 9th and the Dalgleish brothers 10th.

As for the red flag that was caused by Lee Hastings’ Subaru which had an underbonnet fire but the crew are OK although the car was towed back to service. Greg Inglis was having a front hub changed at service and Barry Groundwater lost out when the pulley driving the steering pump and the water pump sheared off the engine. 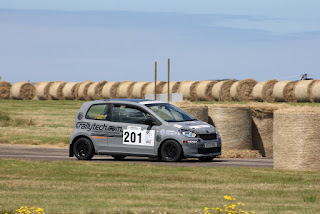 Top Junior 1000 driver was Archie Swinscoe but ONE second separated 2nd and 3rd with Tom Johnstone pulling back 13 seconds over the final two stages to snatch 2nd place from young Owen Paterson. Letisha Conn was only 9 seconds behind this pair to clinch 4th.

The cause of John Rintoul’s retirement was a PDU failure, the sensor which controls the power delivery to the four wheel drive system. Derek McGarrity said his son has a spare and John can have it. Naturally John said yes, thinking it was in the van, but Derek said no, it was back home in Northern Ireland. So guess what, Derek is flying John over to NI this evening in his helicopter to collect the part and fly back. But Derek needs parts too. Even so, ain’t rally camaraderie wonderful? And there’s another 4 stages tomorrow.

Provisional Leaderboard (after 8 of 12 stages)