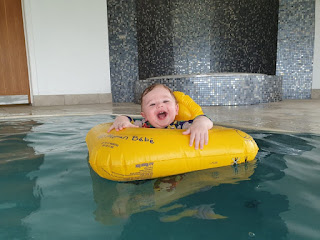 Those of you who are desperately awaiting the news report on last weekend's Mach1 Stages Rally will have to wait a little while longer. It would appear that a rather disruptive influence has blighted the editorial intentions of my Big Pal. One of the main causes of lengthening and missed deadlines is a fairly recent  arrival.

Ten months ago attentions were distracted and priorities changed. Fortunately, or unfortunately, rallying itself had been somewhat disrupted, so in fact my Big Pal was able to cope with a most dutiful and grandfatherly response.

However, now that rallying has (almost) resumed the big chap is trying to accommodate both roles. The wee chap's Mum (formerly known as Baby Bunnet) is due to resume work after maternity leave so the grandparents will be called into even more regular action. Let the mayhem commence.

Anyway, onwards and upwards, the report is well underway with news of new cars, new hopes and new ambitions.