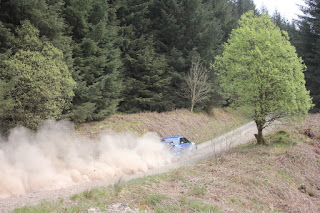 A previous post on this page mentioned the recent publication of the Forestry England Motorsports Review document and referred to its 11 page 3,000 word Executive Summary. And whilst it would appear that forest rallying is safe for the moment it was not exactly fulsome in its support. Mention was also made of how the sport fits into the future of Forestry England plans, both financial and environmental, and how the organisation is perceived by the wider public.

Much has now been written on its contents by more learned journalists and published in more august and esteemed journals and it all seems pretty positive. However, I wonder just how many folk have read the full 75 page, 22,000 word Report and not just the Summary.

The main report was compiled by a company called Rural Solutions Ltd who are headquartered in Yorkshire. It is a very comprehensive report and the company's conclusions were informed by both a stakeholder and public consultation process. Public response generated 1680 email responses, 633 of which related to Rallying and 982 from motor cycle Enduro and Trials followers. Eleven car clubs also responded to the questionnaire.

Not a great response, is it? Consider the fact that the Forestry England estate attracts some 235 million visits per year whereas it is estimated that "the footfall generated by motorsport during 2019 attending a total of 19 rallies, 28 enduros and 13 trials was 27,130."

If that figure is correct, motor sports visitors account for 0.01% of FEs total individual visits. Kind of puts us firmly in our place in the pecking order, does it not? According to Rural Solutions they used "data supplied by MS UK and the MSA Rally Championship Steering Group and the ACU."

On the finance front, the average total income generated by motorsports is in the region of £300,000 to £400,000 per annum with expenditure of £300,000 to £350,000 which suggests an overall contribution to the forest estate of somewhere between £50,000 and £100,000. The concern here is that FE does not record accurate repair costs following each event but  they have indicated that this is a matter which will be addressed  so that they can come up with a more accurate 'true' figure. And, according to the Report: "Motorsports appear to be at odds with FE's financial sustainability objectives."

Another concern is public opinion. Many of their visitors believe that motor sport should not be accommodated or tolerated within the forests, on the grounds of pollution, noise and wildlife disturbance. However, FE's own studies have found that wildlife disturbance is minimal whereas other forest activities can be more detrimental. On the issue of pollution both Rural Solutions and FE are well aware that more automotive pollution is caused by the huge numbers of visitors travelling to and from the forests in their own vehicles than by motor sports!

Again the Report states: "Motorsport is an activity which is difficult to justify against the environmental objectives of Forestry England and therefore if these activities are to be permitted, there is a strong argument that they should demonstrate a step change in the adoption of more environmentally sound practices."

The first Option is self explanatory - motor rallying in the woods will cease, while the second Option is just to carry on as before - only that would appear not to be acceptable.

Which leaves the third Option, to Evolve & Adapt - That means to allow the sports to continue, but in an evolved manner in an adapted format.

Hence Motorsport UK is calling for our ideas, suggestions and contributions regarding how the sport can be adapted from the present format, and also, what can be done to the 'tools of the trade', i.e. cars, to make them more environmentally acceptable and less damaging. On this final point that means electrical or alternative fuelled propulsion and less surface damaging technology.

Only 633 folk out of 27,130 possibles responded to the initial call for submissions during last year's public consultation process. On that basis the sport didn't do itself any favours. It's all very well saying few people knew about it, or blaming who did and didn't spread the word.

And where Forestry England goes, Forest & Land Scotland will take an interest.

A final word - aimed at the politicians and decision makers - if only 13% of Great Britain is forested, that makes us one of the most de-forested nations in the world after centuries of weapon making, warship building and pit props. What then gives us the right to criticise other nations for burning trees and clearing forests for arable production?

In the great scheme of things, motor sport is but a small sapling scrabbling for life in a giant forest - and it hasn't got much time to grow!