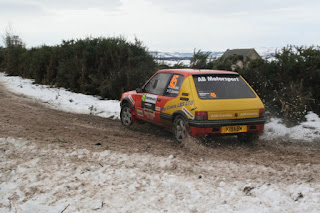 For those of a sensitive financial disposition, perhaps best avoid this wee post. Although rallying is and has never been a 'cheap' sport, there was a time in the 1980s and '90s when single make championships provided an almost affordable entry level attraction to those of an adventurous nature who wished to drive at speed over gravel roads.

As we now contemplate what the future of special stage rallying  might bring, perhaps a wee look back will bring a gulp of nostalgia to those who used to carry cash as opposed to cards.

One of the cheapest forms of one-make rallying was the Lada Challenge for those Russian built Fiats mostly with a choice of 1300 or 1600 pig iron engines. In the mid 80s a solid road runner could be bought for 50 quid, or less. Add some underbody guards, a cage, seats and belts and a rally car was born. It maybe wasn't quick but with a bunch of other Ladas around, it was fiercely competitive - and fun. 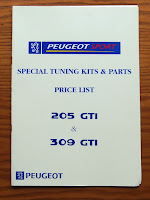 Remember too, the Skoda Challenge. Like the Ladas the Estelles weren't quick but they were built from superior grades of John West salmon tins and with the engine hanging out the rear end, they handled like a lightweight Porsche 911. They too were pretty much unburstable and surprisingly competitive in a 1300cc class overall.

The grand daddy of them all was the Peugeot Challenge. It lasted longer than most as Peugeot continued to support it from the 205  to the 309, the 106 and the 206.

However, the problem was that manufacturers only like to support current models. Their marketing departments have little interest in promoting vehicles which are no longer in production and available in showrooms. When we lost Des O'Dell, we lost the driving force behind that initiative and support. 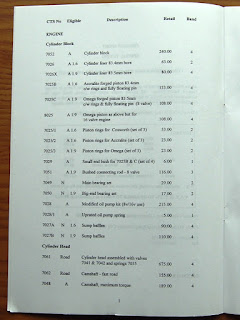 A pity that, if manufacturers can catch the youngsters early, who knows, they might instil some 'brand loyalty' (a trick phrase these days, eh?) in them which they will carry on into professional and domestic life whether buying  a fleet of cars or vans for business or something new and reliable for the family. One only has to look at the never ending appeal of the Subaru Impreza and the Ford Escort Mk2 to see the sense in that.

So what prompted this? I came across a 12 page Peugeot Sport 'Special Tuning Kits & Parts' Price List from the year 1995. As I said, if you flinch at the price of an alloy wheel or carbon seat nowadays you'll suffer palpitations of the wallet when you see these.

You might also recall the names of some of those who dabbled and dazzled in their early competition careers like Colin McRae, Louise Aitken-Walker, John MacCrone, Euan Thorburn, Mark McCulloch, Garry Pearson and Barbara Armstrong, and many, many more. 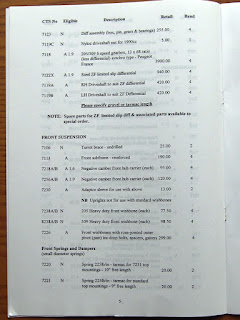 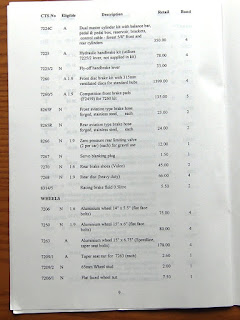 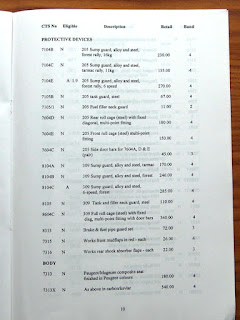