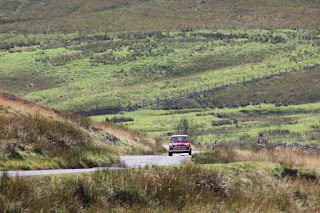 The news that May's Coast2Coast Rally has been cancelled will comes as no surprise given the current pandemic situation. Scheduled to run on Saturday 8th May, the rally has now been put off till May 7th 2022.

That means there will be no special stage rallying in Scotland before the end of May with June and July dates also looking ever more doubtful. The excitement around the arrival of vaccines has somewhat dissipated as reality sinks in. Inoculating 6 million people twice is simply going to take time. Even then, those who do get the jab still have to be careful for a few weeks, not just for themselves but in case they pass the virus on. There is no such thing as a quick fix in this game.

Most reasonable folks are now resigned to what will be a long drawn out process with only the hope of better times to come keeping them sane.

Which is why under current Government guidelines it's not just rallying that is being cancelled but all other forms of amateur sport. It's the same too with music festivals, cinemas, theatres, restaurants, shops, pubs, hotels, exhibitions, outdoor shows, offices and businesses. Any events where people are expected to gather are being cancelled. The country is closed once again.

But perhaps not quite. In a bout of unexplained stupidity, the Scottish Government appears to be suggesting that it is safe to go ahead with the May elections. When all around are shutting down and personal travel is being actively discouraged, the idea that a government, any government, can go ahead with a national mass attendance event in these crazy times is simply ludicrous. It smacks of "Do as we say, not as we do", i.e. one rule for us and no rules for our 'rulers'.

It's not just the party in power that's at fault here, there doesn't seem to be any dissent from the supposed opposition parties. Everybody seems to be concentrating on and arguing about the issue of independence while the subject of a huge undertaking like a general election and the dangers that it might generate have slipped under the radar.

Even the mainstream press seems to be complicit in this denial. Very few have spoken out about the sheer lunacy of organising this event which will require a huge number of voting locations and the staff to run them. Then there is the transport of all the necessary Ballot Boxes and the vote counting staff in centres all around the country. And of course, the nation's adult population itself has to get out of its lockdown and self isolation to travel and go and vote.

The idea is nuts. This election should be delayed by at least a year, until the country is well clear of Covid and the increasing number of variants which seem to be appearing weekly.

Whether the people are for or against independence is immaterial, personal health and safety must surely take precedence.

Of course the Polis could be asked to take action wherever they see gatherings of people and arrest those who are congregating in village halls, schools and phone boxes around the country purporting to be engaged in an act of vital democracy. And if the Polis can lock up folk attending weddings, funerals, raves and parties, then why not those in political parties. Maybe then they'd see some sense.