On a lighter note 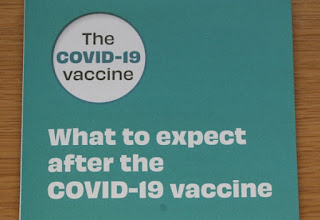 It seems my big pal Jaggy got jagged today. His date with destiny took place at Motherwell Civic Theatre, normally the venue of school plays and drama clubs, pantomimes and concerts. A place of culture transformed into a place of torture.

The waiting line of elderly stooped figures with creaky knees reached around the corner away from the main door and so the lad joined on maintaining his safe social distance and wondering why he should be chosen amongst so many old folk - No, I didn't think he was that old either. The task of social distancing made easier by the aromatic foul reek emanating from his pipe which kept others at a more than respectful distance.

The queue shuffled slowly towards the door where the official summons letters were shown to the volunteer hi-viz wearing 'guards' and then directed to a table for names to be taken.

Instructions were issued to join the queue snaking up the stairs to the temple of doom. More marshals ushered arrivals to smaller queues whilst the smell of hand cleanser and antiseptic, and indeed fear, assailed the nostrils.

Rows of white cubicles stretched ahead tended by threatening masked and robed figures seemingly  hovering above the parquet floor as they floated eerily and silently about their duties. A faint hum of whispered words hung in the air. Such inspiring and encouraging utterances from within the cubicles as: "You’ll be fine", "It won’t hurt a bit", and "One wee prick and it will all be over."

The queue shortened, Jaggy was next, and he was led to a small plastic seat which looked more threatening than a dentist’s chair. Here his temperature was taken by a masked figure with a 'speed gun' held to his forehead. It beeped. The voice said: "I'll need to do it again." This time it beeped furiously. Another nurse was called over and checked the reading, inquiring: "Are you OK?" The reply was in the affirmative. Again the voice: "Are you sure, are you feeling well?" The affirmation was rather more succinct this time and reassurance was sought: "Why, what's wrong?"

The nurse informed him that his temperature was over 38 and it should be under 37 or he would be sent home. The unamused big chap volunteered a solution: "If ye've got a horse thermometer ye can stick it up my bum." The nurse rose to the challenge: "Unfortunately we don't have any horse thermometers here, but we'll check your temperature on your wrist." This time the reading was perfectly fine.

Aware of this slight stooshie, a rather large presence loomed over the now apprehensive Jaggy. This next nurse was of a size and build that should not be allowed unaccompanied in a china shop and yet the voice wouldn’t have sounded out of place coming from a budgie cage. Even more worrying he was armed with a six foot hypodermic needle, or at least it looked like that for a chap who’s fear of needles stems from watching granny with a set of size 15s constantly clackety clack clacking in the corner of the living room knitting scarves for Doctor Who and Chewbacca and forevermore haunting the big chap.

The voice commanded: “You’re next.” With bile rising in his throat to match the fear rising in his stomach Jaggy approached the deathly white cubicle, sat on the plastic chair, and as instructed pulled up his left sleeve to expose the tender flesh and await his fate with trepidation. It was like Sir Lancelot on his wee Sheltie sensing the approach of the Black Knight on his Clydesdale with his deadly poison tipped giant lance.

And with one mighty stab, the deed was done. The sudden yelp of pain was abruptly halted mid throat as the descending gulp choked it off. Job done. Who’s afraid of the big bad wolf now, eh?

There was worse to come. No badge, not even a sticker. How about a certificate? Nope, our disappointed hero was given a leaflet and told to sit in the waiting area for 15 minutes in case he fainted.

The big lad managed two minutes. Sitting there amidst a sea of grey hair and mothballed coats he felt a nervous dose of the heebie jeebies. The minute the officiating Marshal turned her back he was off like a Fiesta WRC on launch control heading for the door and sanctuary.

Returning home to Lady B like a smug swaggering conquering hero the bold lad told her the Covid 19 jag was nothing, an absolute doddle, and she shouldn’t be feart when she is called next week - just before she whacked him a well placed mighty thump on his upper left arm!

Aye, it was nice to be home.